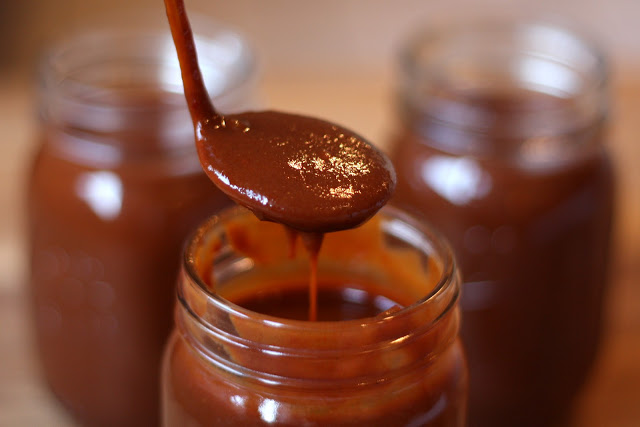 “The sauce makes the barbecue” is often heard from barbecue aficionados. Barbecue sauce is almost always used when cooking foods on a grill or even roasting in the oven. Sauce adds deep flavor and sticky richness to your meat or poultry.

The ingredients vary widely in barbecue sauces, but most include some variation on vinegar or tomato paste as a base, as well as liquid smoke, spices such as mustard and black pepper or hot pepper, and sweeteners such as sugar, honey or molasses. The most common barbecue sauce in the U.S. is a Kansas City–style which uses puréed tomatoes or tomato sauce, corn syrup, molasses and vinegar and has a long shelf life. Most commercial sauces are based on this type. They may offer some variety like hot pepper, bourbon or whiskey or even oriental flavors. Every part of the U.S. has a style all its own and each will insist theirs is the best.

The first commercially offered barbecue sauce was sold in the early 1910s in Atlanta, Georgia. There is plenty of evidence that this manner of cooking was invented in the South. However, as cuisine styles moved around the country, each region put its own stamp on the ingredients, leading to a wide variety of barbecue sauces around the United States.

Kansas City barbecue sauce is thick, reddish-brown, tomato or ketchup-based with brown sugar, vinegar, and spices. Evolved from the first known barbecue sauces, it is thick and sweet and does not penetrate the meat as much as sit on the surface. This is the most common and popular sauce in the U.S. You can purchase lots of different versions of this sauce in any well-stocked grocery.

Memphis-style barbecue sauce is similar to the Kansas City style, typically having the same ingredients, but often is more sour as it uses a larger percentage of vinegar. The typical sweetener is molasses, a popular ingredient in that region.

South Carolina barbecue sauce is a yellow barbecue sauce made primarily of yellow mustard, vinegar, sugar and spices. This sauce is most common in areas originally settled by Germans.

Texas-style barbecue sauces have a Mexican influence. They are often heavily seasoned with cumin, chili peppers, bell peppers, chili powder or cayenne or black pepper, and fresh onion. They usually contain only a bit of tomato sauce or ketchup and very little sugar. They are of medium viscosity and penetrate the meat easily rather than sit on top.

Alabama white sauce is a distinctive mayonnaise-based sauce, which is used predominantly on chicken. It is composed of mayonnaise, vinegar, sugar, salt and black pepper.

While all these sauces can be purchased in a bottle, we prefer homemade. We’ve tried lots of barbecue sauce recipes and have some favorites to share. Any of these sauces can be used on steaks or chicken. They can be stirred into ground beef when making burgers or slathered on a roast and slow cooked. These sauces are in quantities large enough for more than one use. Always take off a portion of sauce for your barbecue and discard after use. To prevent germs and contamination, never reuse barbecue sauce. 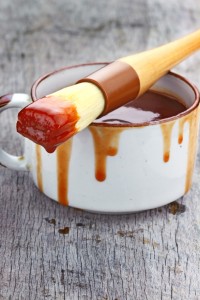 In a medium saucepan, combine all ingredients. Bring mixture to a boil; reduce heat to simmer. Cook uncovered, stirring frequently, for 1 hour 15 minutes. Sauce can be stored in the refrigerator for 2–3 weeks.

This sauce is more complex and has many more ingredients, but we think you’ll agree that it’s worth the work involved in getting them all out.

Sauce can be stored in the refrigerator for 2–3 weeks. 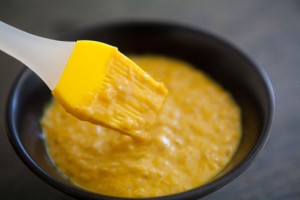 This sauce does not need to cook as long as the others. It’s a bit thinner but soaks into the meat. Baste meat or chicken during the last few minutes of cooking or until the sauce is caramelized.

In a small saucepan, heat the oil over medium heat. Add the garlic and onion and sweat briefly, about 30 seconds. Pour in the yellow mustard, sugar, vinegar, and the hot sauce. Simmer over medium-low heat for 15 minutes. Pulse with an immersion blender until smooth, and then season with salt and black pepper.

Use the hot stuff carefully. If your family likes things really hot, use the seeds in the peppers. If not, just discard them and use only the outer part of the peppers. Be sure to wear gloves when chopping chili peppers.

Stir all the ingredients together in a medium saucepan. Simmer about 25–30 minutes, then purée in blender until smooth and to help bring out all the flavors. This will keep in the refrigerator for 3–4 weeks.