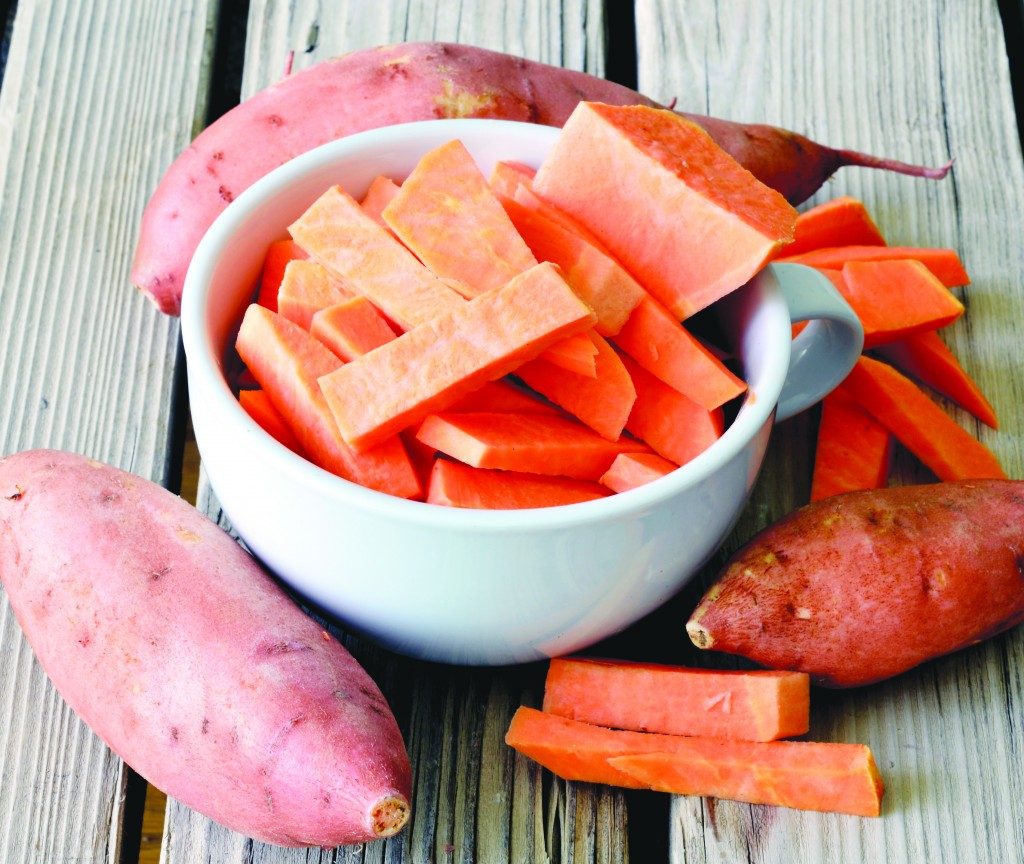 (Bloomberg) – The once lowly sweet potato is being reborn as a kind of hip, orange super food.

… Today, sweet potatoes turn up everywhere, as healthier, nutrient-dense alternatives to French fries at burger joints or colorful side dishes for swanky restaurants. They have more fiber and fewer calories than white potatoes.

And the appeal isn’t just among Americans, who are eating twice as many sweet potatoes as they did in 2002. Demand also is surging in Europe. In the U.S., the world’s biggest exporter, farmers are planting their biggest crop in five decades, after their shipments overseas doubled in five years to an all-time high. Nutritionists say consumers who want to eat fewer grains and processed foods are choosing sweet potatoes.

“We’ve seen various different plants emerge as new superstars,” said Kristin Kirkpatrick, manager of wellness nutrition services at Cleveland Clinic Wellness Institute. “From a diet perspective, people are so interested in really eating much closer to the farm. Sweet potatoes could be clumped in with beets and kale and some of these other things that are coming from the ground and not coming from a plant where people are wearing hairnets.”

While Americans still eat far more white potatoes — as French fries or just baked or mashed — demand has slowed. Consumption was 113.7 pounds (51.6 kilograms) per person last year, down from 125.4 pounds a decade ago, the U.S. Department of Agriculture estimates. Meanwhile, sweet potatoes are catching on and growers are marketing them as a year-round staple. In 2015, consumers ate 7.5 pounds, up from 4.5 pounds in 2005 and 3.7 pounds in 2002, USDA data show.

Sweet potatoes, which belong to a different plant family than white potatoes and yams, were already well established as a root vegetable in Central America and South America by the time explorer Christopher Columbus arrived in the late 1400s. They were a big part of the U.S. diet almost a century ago, peaking in the 1930s, before falling out of favor over the next six decades. With demand and output now rebounding, the crop is marketed in everything from dog food to vodka.

Most of the U.S. crop is grown in the Southeast, where land has traditionally been used for tobacco and cotton. More than half comes from North Carolina. Total domestic output last year jumped 4.8 percent to 31 billion pounds, the highest since 1946, USDA data show.

Seedings this year are forecast at the highest since 1965, the USDA estimates, providing a profit boost to farmers at a time when global surpluses of grain and oilseeds have led to lower prices and losses on those crops. A farmer can generate $1,200 to $1,400 of operating income per acre growing sweet potatoes, up from $827 in 2012, according to an analysis by Elizabeth Canales, an assistant professor of agricultural economics at Mississippi State University. By comparison, U.S. farm income is falling for many crops, and some Midwest corn growers may barely break even.

Kornegay Family Farms in Princeton, North Carolina sowed 800 acres of sweet potatoes this year, up from 600 in 2015 and double the amount a decade ago, said Kim Kornegay-LeQuire, vice president of the company’s sweet-potato packing and marketing unit. The family, which began farming in 1953, also grows tobacco, soybeans, peanuts, wheat, watermelon and asparagus. It packages about 760,000 pounds of sweet potatoes a week, with three-quarters of that exported, she said.

“If you’re a commodities farmer just dealing with soybeans or wheat or corn, you’re very thankful to have sweet potatoes in your arsenal because, not only does everything help each other out with crop rotation, but you don’t have all your eggs in one basket when it comes to row crops,” said Kornegay-LeQuire, who is part of the family’s fourth generation of farmers.

China is by far the biggest consumer, and produced 70.5 million metric tons in 2013, more than 20 times any other country, according to the latest United Nations data. But demand for U.S. exports is being driven mostly by increased sales to Europe, including the U.K., Netherlands, Belgium and Ireland. Exports last year of 179,881 tons were more than double those in 2010, and sales in the first five months of 2016 are running 24 percent ahead of the prior year’s pace, according to USDA data.

“It has certainly [become] more popular than it used to be before because maybe we finally worked it out how to cook it properly,” said Scott Hallsworth, owner of a restaurant in London, where he serves sweet-potato fries. “People don’t realize how versatile it is.”

Restaurant owner Lorraine Cais said she’s using more sweet potato because it “marries very well with hot and spicy Mexican food and offers us a chance to challenge ourselves, innovate and get more flexibility in designing our dishes with it, unlike regular fries, which are boring.”

“This crop appears to be benefiting in some changes in taste and preferences,” said Jennifer Bond, an economist with USDA’s Economic Research Service in Washington. “They’re seen as a little more gourmet than the regular potato.”