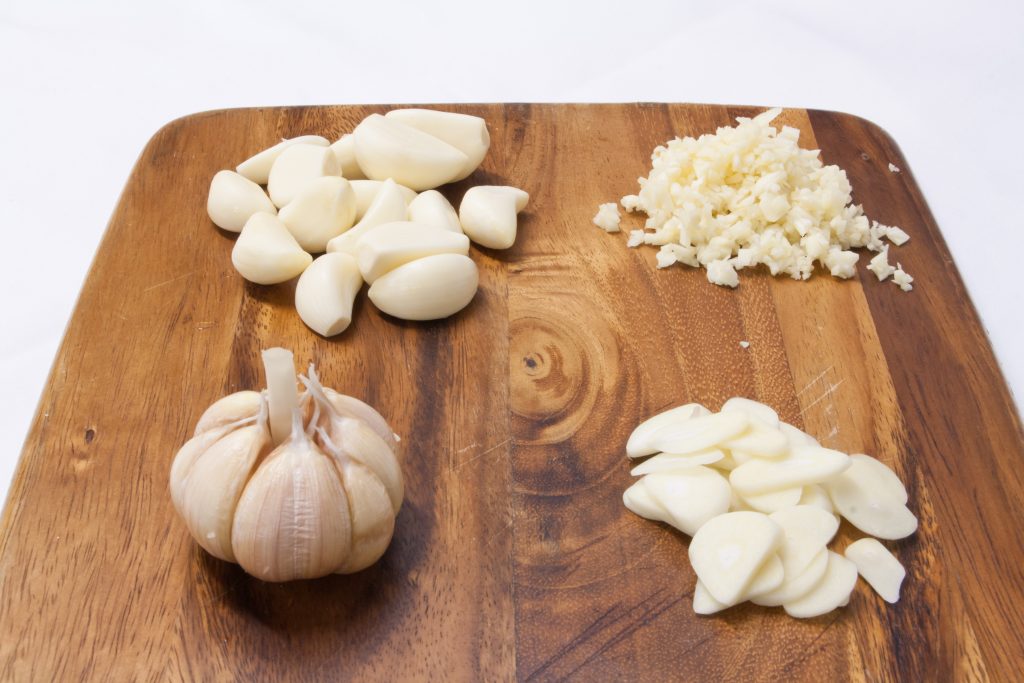 There are probably plenty of small but mighty ingredients hanging out in your kitchen. Cinnamon sticks, dried chili peppers, cardamom and herbs are all proof that size is definitely not proportionate to how much flavor a food has.

Perhaps the MVP of the culinary featherweights is garlic. Easy to buy, easy to store and easy to incorporate into a wide variety of dishes, this little bulb can do it all.

“It’s such a simple way to get a lot of flavor. It’s a simple bulb,” says Kate Winslow, who with her husband, Guy Ambrosino, wrote a dedicated cookbook on plants of the Allium genus, including onions, scallions, shallots, leeks and — you guessed it — garlic, among others.

It’s complex, too. When raw, garlic is sharp, spicy and pungent. But cooking garlic gives way to sweetness, even caramelization.

Want to make the most out of your garlic? Here’s some helpful info and a few clever hacks.

Know What You’re Getting

Winslow and Ambrosino write in their book that there are two main subspecies of garlic: soft-neck, which features large cloves around a center of (annoying) smaller cloves, and hard-neck, which sports larger cloves in a single ring around a woody stalk. You’re most likely to come across hard-neck at the farmer’s market. Don’t bother with elephant garlic, they advise, which is more closely related to leeks, boasting a mild onion flavor that is not a suitable stand-in for regular garlic.

When choosing garlic, try to get as fresh as you can. The taste gets stronger as it ages, Winslow says. The cloves should be plump and juicy, not wrinkled. Ideally, they won’t have a green sprout running through the middle, but if that’s the only garlic you have, just pop it out with the tip of your knife and move on.

Store garlic in a spot with good air circulation; cool and dark is helpful, too.

Ah, peeling garlic. There are plenty of ways to accomplish this somewhat tedious task. But food editor Joe Yonan’s favorite method is the good ol’ knife smash. The other methods involve more steps, more equipment and sometimes more mess. Garlic skin flying everywhere is one downside of shaking all the cloves in a bowl, the couple says. If you have to peel a lot, as in several heads’ worth, the microwave or skillet might be worth considering. Otherwise, for everyday garlic tasks, stick with the trusty knife.

Even so, she advises against pre-peeled (and minced) garlic, the flavor and age of which can be questionable, and which includes preservatives. Best to work your way through a head a week.

The general rule of thumb is that the more you break down the garlic, the stronger the flavor will be. So if you want to gently flavor the oil you’re sautéing vegetables in, throw in halved or whole cloves, as Winslow and Ambrosino do. “I use it almost every single time I sauté a vegetable,” Ambrosino says.

If you want just a whisper of garlic in your mashed potatoes, throw some cloves in as you boil the potatoes (remove or crush and incorporate into the final dish) or steep it in the milk as you warm it.

Minced makes for especially potent flavor. If it’s going into a dish raw and you’re worried about its strength, mince the cloves and place in a small microwave-safe bowl with a teaspoon or two of extra-virgin olive oil. Microwave in 10-second increments until fragrant, and the bits have turned slightly golden in color.

If you prefer to have your minced garlic on the smoother side, mince it with a pinch of kosher salt, chopping and smearing the two together until it forms a paste. That’s especially good for something like salad dressing, Winslow says.

Roasting garlic is another versatile option. Winslow and Ambrosino suggest cutting off the top quarter-inch of two heads to expose the cloves, drizzling them with two tablespoons of oil, wrapping in aluminum foil and roasting at 500 degrees F (260 degrees C) for about 40 minutes. The garlic will be very soft, which makes it easy to squeeze cloves out of the papery skins once they have cooled slightly. Incorporate the cloves into butter for a compound butter, or add to mayonnaise for a quasi-aioli. Or just spread directly onto bread. Use them wherever you want mellow, sweet garlic flavor.

If you want to start using garlic in more of your everyday cooking, there are a lot of ways you can go. One of the simplest is to rub a raw clove on toasted or broiled bread.

“It’s like salt in a way,” Ambrosino says. “It just adds more flavor.”

Serve with salad and soup, as well as dips, spreads, bruschetta and tapenade.

Winslow is a fan of adding garlic to marinades. “It makes such a full-flavored marinade,” she says.

As we’ve already covered, garlic is a natural in dressings. It’s also right at home in stir-fries, particularly when mixed with scallions and ginger. (Just keep your eye on it, as once garlic is minced, it can cook and turn fragrant in as little as 30 seconds.)

Ambrosino likes to do a simple pasta with oil, garlic and hot pepper.

That’s only the beginning. “Garlic is definitely our second love behind onions,” Winslow says. “I think it’s an ingredient that should be in every cook’s kitchen.”

“It’s used in cuisines all around the world,” she adds. “It’s really worthwhile getting to know it.”