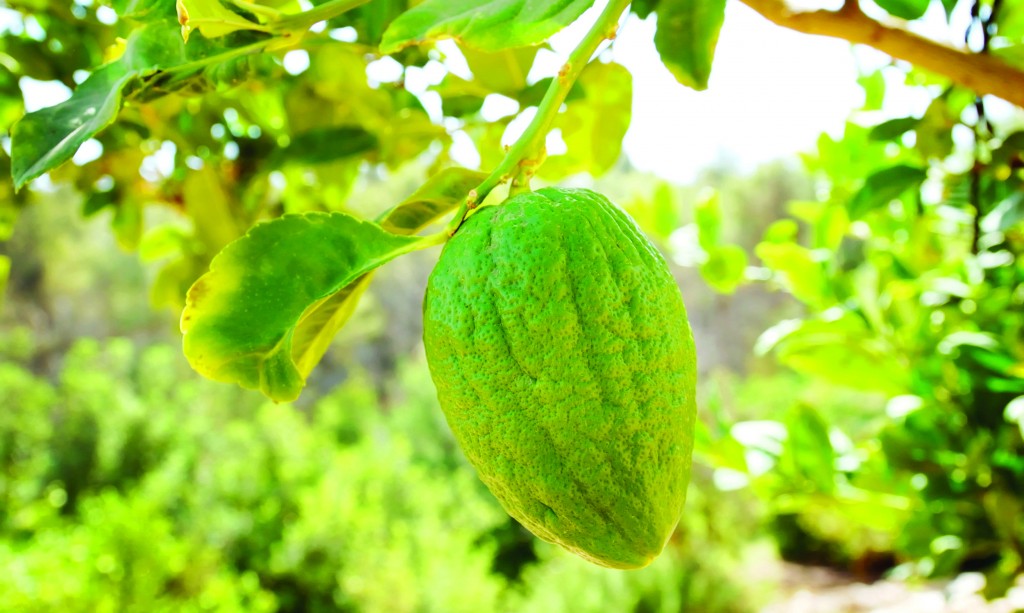 The esrog, or citron, is not a typical citrus fruit like the lemon or orange. While the most popular citrus species are peeled in order to consume the inner pulp and juice, the esrog contains an extremely dry pulp which has little value when compared to other fruits such as the orange. The bulk of the fruit actually consists of the thick white rind which adheres strongly to the inner pulp and is very difficult to remove.

From ancient times, the esrog was generally used only for the fragrance of its outer peel or for medicinal remedies against seasickness and pulmonary or intestinal ailments. Esrog juice with wine was considered an effective way to rid the body of just about any poison known to man. The essential oils in the peel were regarded as an antibiotic.

Today, the most important part of the esrog is the peel, which is fairly popular in the international food trade. The fruits are cut in half, the pulp removed, and immersed in salt water to ferment for about 40 days. The salt water is changed every 2 weeks to ensure optimal brining. After the brining period, the peels are rinsed and packed in wooden barrels for storage and for export. After rinsing and boiling to soften the peels, they are candied in a strong sugar solution. The candied peels are sun-dried or jarred for future use. Candying is done mainly in England, France and the United States. Candied citron peels are widely employed in the food industry, especially as an ingredient in fruit cake, English plum pudding, buns, sweet rolls and candy. Today there is also a growing market in the United States for the white fiber which is found in the citron’s thick rind. 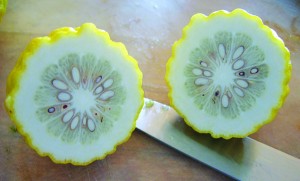 Interestingly, the esrog seems to be one of the only original fruits of the citrus family and is obviously not a hybrid. Lemons, oranges and the like are all naturally occurring hybrids that have evolved over the years from the earliest citrus. The esrog is a self pollinating tree which may be the reason why the esrog has remained true to its origins.

Throughout the world the citron is considered to be a fruit of special beauty. The nicer ones are those with medium-sized oil bubbles at the outer surface, which are close to one another. Some of them are ribbed and have faint warts, which add additional beauty.

If not picked from the tree, the esrog would never fall off and could reach 8–10 pounds. Wow, it would be kind of hard to carry that around all Sukkos! Most esrogim are picked when still unripe, as ripeness is not necessary for performing the mitzvah. However, green esrogim will not make for tasty jam, so allow your esrog to ripen before trying our tasty recipes below.

Soak the whole esrog for 10 days. If you are using multiple esrogim, they may be soaked together in the same bowl. Change the water daily.

Cut the esrog into slices crosswise, approximately 1/3” thick. Remove the numerous seeds and discard. If you’ve never sliced open an esrog, you’ll be exceedingly surprised at the multitude of seeds and the thickness of the skin. It seems to have almost no flesh at all. Place the slices in a large bowl and cover with water. Let it soak once again overnight in a cool place. 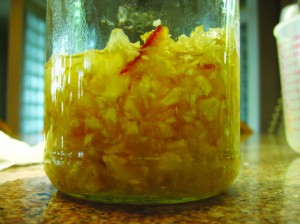 The next day, drain the water. Place all the slices in a large pot and cover with fresh water. Bring to a boil and pour off the water. Repeat this “boil and drain” procedure nine more times for a total of 10 times. This will help tone down the bitterness of the fruit.

Next, the esrog is cooked in a sugar solution. For each esrog use the following proportions:

Bring the sugar and water to a boil. Pour over the drained esrog slices. Let this mixture stand at room temperature a few hours or overnight.

The next day, cook the esrog and sugar mixture over a medium-low flame for 2½ hours, checking it frequently to be sure that the sugar is not darkening. Lower the heat if necessary. Add the lemon juice and cook a half hour longer. 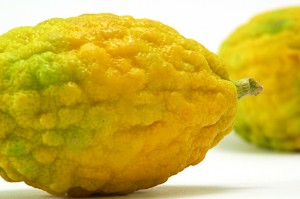 While the mixture is cooking, prepare your jars for canning. Use two half-pint jars per esrog. Place the clean, empty jars in a large stockpot and fill with water. Heat the water and boil for 10 minutes. In a separate, smaller pot, heat jar lids and sealing rings just until hot. Do not boil the lids as it will damage the seal. Using canning tongs or locking tongs, lift the jars out of the hot water, one at a time. Fill each jar with the hot esrog mixture to ¼ inch below the top. Close jar with hot sterile lid. Return the jars to your stockpot and bring to a boil once again. Cook for 5 minutes and remove from the water. Wait for the distinctive “pop” that lets you know the jar is sealed. Cooling the jars upside-down helps facilitate sealing. Fastening the jars in this manner allows you to store them without refrigeration for a long period of time. If you prefer, just screw on the lids and refrigerate until needed. The esrog jam will last 3–4 months in the refrigerator.