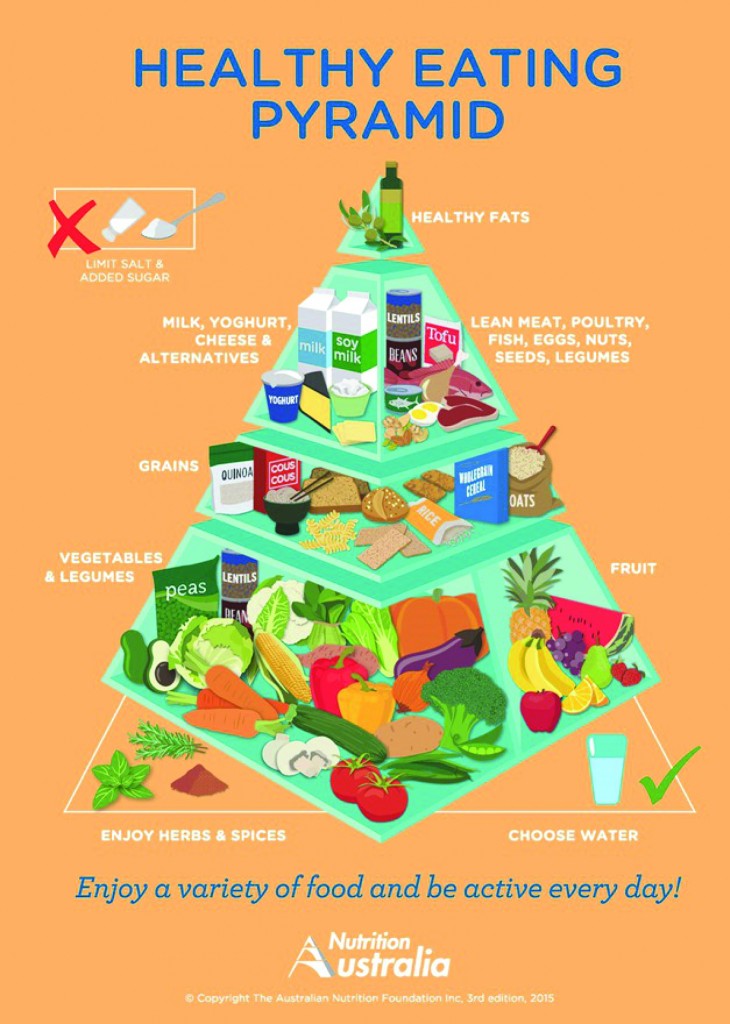 Australian nonprofit Nutrition Australia is advising citizens about the harms of unhealthy eating, which has left the island country with one of the highest obesity rates in the world. The campaign centers on a modern day food pyramid, which is based on the country’s most recent nutritional guidelines. And guess what? It’s a whole lot more innovative than the American equivalent currently being used by the U.S. government.

Unlike MyPlate, which the United States Department of Agriculture adopted in 2011, the clever new pyramid not only divides and ranks food categories, but also illustrates actual foods that people encounter at the grocery store.

Plant-based foods, which are listed at the bottom, and therefore meant to be consumed the most often, are represented by over 30 different foods, including peas, lentils and bok choy. Grains, listed just above, include couscous and quinoa. Dairy, which is next in line, includes alternatives like soy milk. And proteins, which are level with dairy, are depicted with a prominent bag of tofu. At the very top, there are healthy fats, illustrated with a bottle of olive oil.

Now, compare that with the U.S. visual guideline, which is a plate, divided into different-sized categories: fruits, vegetables, grains, protein, dairy.

MyPlate was introduced in order to lessen clutter. The hope was that by simplifying the visual representation of the nutritional guidelines, the government could make it easier for children to understand them. The change was met with reluctant applause. While it did represent what many viewed as an improvement over MyPyramid, which had been used since 2005, it failed to achieve the standards many nutritionists hoped the government would keep.

“Clearly MyPlate will be better than MyPyramid, but the most important issues are in the details that are not captured by the icon,” Walter Willett, a professor and chair of the Department of Nutrition at Harvard School of Public Health said at the time. “What type of grain? What sources of proteins? What fats are used to prepare the vegetables and the grains?”

There is ample reason for why Willett is troubled by the ambiguity of current U.S. visual guidelines. Numerous studies have shown that Americans lack even basic knowledge of nutrition. A 2013 study showed that adults in the United States misunderstood caloric intake, while a 2012 survey found that Americans weren’t too great at identifying which foods are high in fat, calcium and fiber.

Telling someone to eat dairy, but not delineating clearly that that category can also include dairy alternatives can amount to confusion. So, too, can a portion of grains or proteins, when not all are created equal.

What Nutrition Australia’s guide does is allow for clarity where it might be useful. What grains and proteins should someone opt for? How about these, pictured in the pyramid, which are optimal by government standards.

The graphic even takes it a step further, by tacking on a couple of tips — like “limit salt and added sugar,” and “choose water.” And coyly excluding any depiction of butter, margarine or sugar.