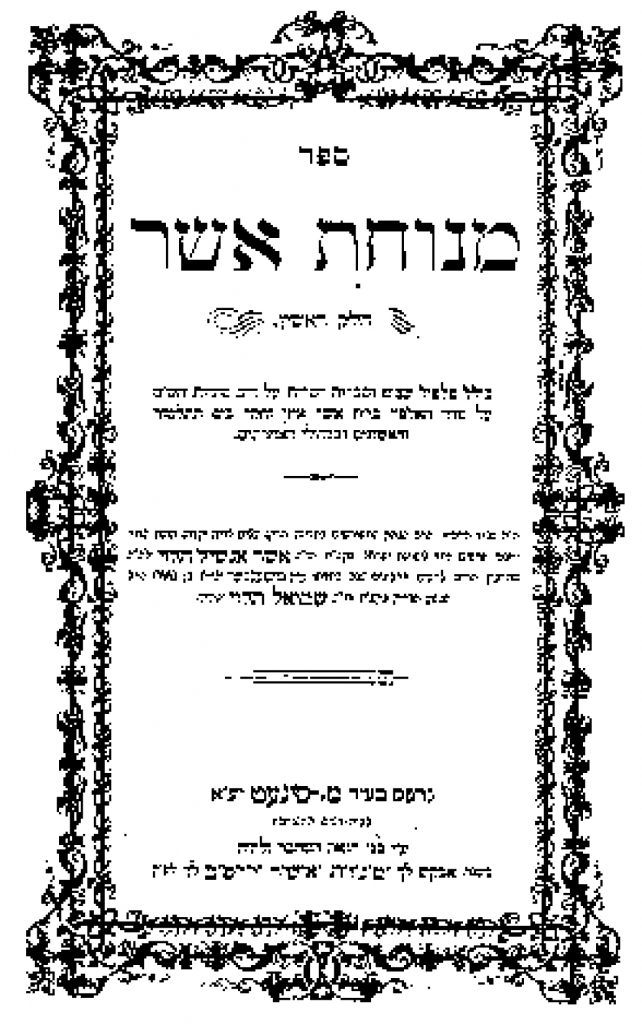 5258/1497, the Jews were expelled from Portugal by order of King Manuel I. The actual decree of expulsion was announced earlier, but the grace period ended on this day.

At the age of 13, Rav Asher Anshel went to learn under the Maharam Ash in the city of Balsha-Diarmat, and later under Rav Koppel Charif of Verbau.

He married the daughter of Harav Meir Popffer of Olmushid. His father-in-law supported him for five years.

Eventually, Rav Asher Anshel became Rav in the city of Csenger. During his early years there he lived in abject poverty. One day he was locked in his room, learning with his children under the covers so that they would not freeze.

Somehow a man managed to enter and asked him, “Why don’t you give people advice on medical matters? That way you could bring in a little extra income to supplement your paltry salary as Rav.”

The stranger began to write on the table cures to different conditions, until the entire table was filled with advice on how to cure a multitude of illnesses.

After the stranger left, the Rav asked his Rebbetzin to clean off the writing from the table, but this was without success.

Realizing that the guest must have been the malach Refael, he copied the cures into a notebook. From then on, thousands flocked to Csenger to obtain medical advice from him, seeing him as a po’el yeshuos.

His diligence in learning was extraordinary. In addition, his complete selflessness when it came to giving tzedakah was almost unimaginable.

The Rav had an extremely pleasant disposition, and his talmidim attested that they never saw him become angry.

For 50 years Rav Asher Anshel spread Torah among Bnei Yisrael. He had hundreds of students. For 40 years he tended his flock in Csenger, and his sefarim became a legacy for future generations.

His Menuchas Asher — on Shas, on Chumash, and his responsa — contain only a small portion of the many chiddushim he wrote. His sefarim were greatly treasured by Gedolei Hador, and by his own great talmidim.

The Unsdorfer Rav, the Be’er Shmuel, used to say that because of the mechaber’s holiness, the sefer protected the house from all evil.

In 1775, during the American Revolution, the Continental Army captured Montreal.

In 1942, President Franklin D. Roosevelt signed a measure lowering the minimum draft age from 21 to 18.

In 1956, the Supreme Court struck down laws calling for racial segregation on public buses.

In 2000, lawyers for George W. Bush failed to win a court order barring manual recounts of ballots in Florida. Florida Secretary of State Katherine Harris announced she would end the recounting at 5 p.m. Eastern time the next day — prompting an immediate appeal by lawyers for Al Gore.

In 2001, President George W. Bush approved the use of a special military tribunal that could put accused terrorists on trial faster and in greater secrecy than an ordinary criminal court.