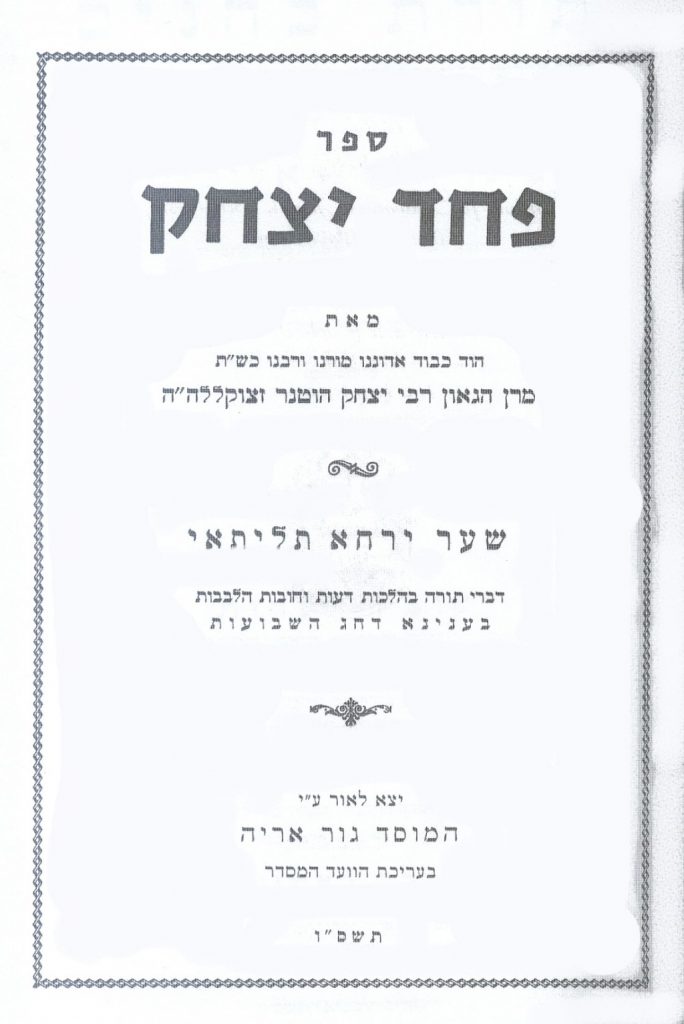 A child prodigy, he was taught by private tutors until age 15, when he was enrolled in the Slabodka Yeshivah, headed by Harav Nosson Tzvi Finkel, zt”l, the Alter of Slabodka.

In 5685/1925, Rav Hutner was sent to help start a branch of the Slabodka Yeshivah in Chevron. He learned there until 5689/1929, narrowly escaping the Chevron massacre because he had gone away for that Shabbos.

In 5695/1935 Rav Hutner immigrated to the United States, settling in Brooklyn. Initially he did not seek a formal position; however, he soon joined the faculty of Yeshivas Rabbi Jacob Joseph (RJJ), and was later appointed first a teacher and then principal of the newly established high school division of Yeshivas Rabbeinu Chaim Berlin, known as Mesivta Yeshivah Rabbeinu Chaim Berlin.

Under Rav Hutner’s leadership, Yeshivas Rabbeinu Chaim Berlin grew from relative obscurity to prominence, and with it grew his reputation in the world of Torah scholarship.

There exist seven volumes of his maamarim on the Yamim Tovim, entitled Pachad Yitzchak. Their style is highly original, combining logic and passion with poetic prose. In addition, there is another volume of letters and writings. One of his students published two volumes of his notes on other talks, entitled Reshimos Lev.

In 5739/1979, Yeshivas Pachad Yitzchak, named for his magnum opus, opened in Har Nof, Yerushalayim, where Rav Hutner settled. A kollel called Ohr Eliyahu was also established on the premises.

During his last few years in Eretz Yisrael, Rav Hutner served as Nasi of Machon Yerushalayim, and he was among the editors of the Otzar Meforshei HaTalmud.

In Cheshvan 5741/1980, Rav Hutner was partially paralyzed by a stroke; he was niftar a few weeks later, on 20 Kislev, at the age of 84. His kever is located on Har Hazeisim in chelkas hanevi’im.

In 1787, New Jersey became the third state to ratify the U.S. Constitution.

In 1865, the 13th Amendment to the Constitution, abolishing slavery, was declared in effect.

In 1940, Adolf Hitler signed a secret directive ordering preparations for a Nazi invasion of the Soviet Union. (Operation Barbarossa was launched in June 1941.)

In 1944, in a pair of rulings, the U.S. Supreme Court upheld the wartime relocation of Japanese-Americans, but also said undeniably loyal Americans of Japanese ancestry could not be detained.

In 1956, Japan was admitted to the United Nations.

In 2000, The Electoral College cast its ballots, with President-elect Bush receiving the expected 271; Al Gore, however, received 266, one fewer than expected, because of a District of Columbia Democrat who left her ballot blank to protest the district’s lack of representation in Congress.