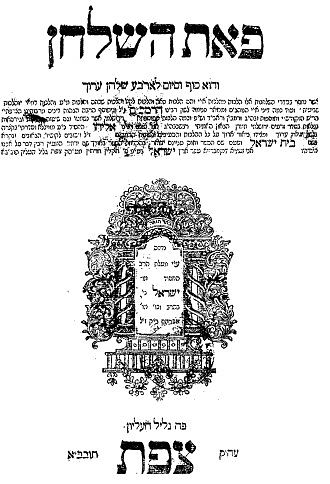 Approximately 10 years after the Vilna Gaon’s passing, in 1808 or 1809, the first group of the Gaon’s talmidim, numbering about 70 people and headed by Rav Menachem Mendel of Shklov, moved to Eretz Yisrael. They first settled in Teveria, but after a short time moved to Tzfas. About a year later there was a second wave of immigrants to Eretz Yisrael, headed by Harav Saadiah ben Reb Nosson Nota, zt”l.

All this time, Rav Yisrael was raising funds in Russia and Lithuania to help establish the new residents. Time and again he embarked on fund-raising missions throughout Europe, and encouraged Jews to move to Eretz Yisrael. In the summer of 1839, Rav Yisrael headed his own group of olim, a group that is credited with founding the Ashkenazic yishuv and the community of Perushim — talmidim of the Vilna Gaon.

He was the representative of the Ashkenazic yishuv; and the Ottoman authorities held him responsible for the entire community; they had no compunctions about imprisoning him due to unpaid taxes, or for some libel of the Arabs.

He was appointed Rav of the Perushim throughout Eretz Yisrael.

Rav Yisrael endured great suffering, which he accepted b’ahavah with the understanding that it was from Above.

Rav Yisrael’s spiritual legacy has undoubtedly enriched the batei medrash throughout the generations. His best known work is Pe’as Hashulchan, an appendix to the four parts of the Shulchan Aruch — Yoreh Deah, Choshen Mishpat, Even Ha’ezer and Orach Chaim — relating specifically to mitzvos associated with Eretz Yisrael: leket, shik’chah, pe’ah, demai and sheviis. He printed Taklin Chadetin, his commentary on Yerushalmi maseches Shekalim.

On 8 Sivan 5594/1834, a Druze uprising erupted in northern Eretz Yisrael. For 33 days the Druze attacked and looted Jewish homes. Reb Yisrael Beck’s printing house was destroyed. Two years later, it was restored and Pe’as Hashulchan was printed, with enthusiastic approbations from Gedolei Yisrael.

In Sivan 5599/1839 he visited Teveria for a few days, to bathe in the city’s healing springs. Unfortunately, he was niftar there, on 9 Sivan.

For many years, no one knew the location of his kever. In 5724/1964, his matzeivah was discovered in Teveria’s ancient cemetery.

In 1967, Egypt closed the Straits of Tiran to Israeli shipping, an action that helped precipitate war between Israel and its Arab neighbors the following month.

In 1977, Moluccan terrorists seized a train and a primary school in the Netherlands. The hostage drama ended June 11, as Dutch marines stormed the train, resulting in the deaths of six out of nine hijackers and two hostages, while the school siege ended peacefully.