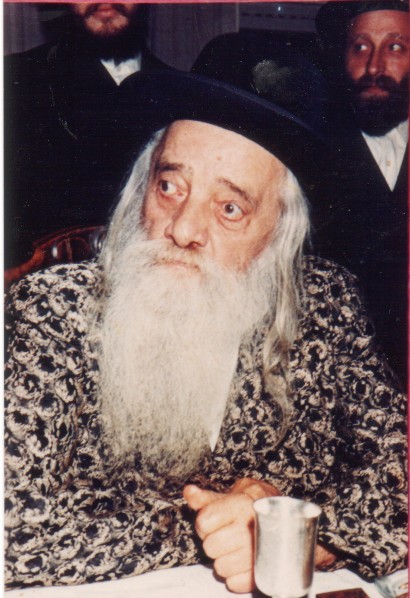 Harav Chaim Meir was born on 15 Kislev 5648/1888. His father was Harav Yisrael, the Ahavas Yisrael of Vizhnitz, and his mother was the daughter of Harav Meir, the Imrei Noam of Dzikov.

From his youth, he was an intense masmid. He was very close to his father, who once called him a “Baal Shem Yid.” He went on to receive semichah from the Geonim Harav Shmuel Engel of Radomishla, Harav Meir Arik, and Harav Shalom Mordechai Hakohen Schwadron, zichron tzaddikim livrachah. The Imrei Chaim married Margulia, the daughter of Reb Zev Wolf Twersky of Rachmastrivka.

In 5670/1910, the Imrei Chaim became Rav in Vilchovitz, Romania. In 5696/1936, his father was niftar and the Imrei Chaim succeeded him as Rebbe, along with his other four brothers. He held court in Grosswardein, where he also established a yeshivah. His older brother, Harav Menachem Mendel, became Rebbe in Vishiva; Harav Eliezer became Rebbe in Vizhnitz; and Harav Baruch in Seret.

In 5704/1944, when the ghettos were established in Hungary, he procured a permit to work in the forests on behalf of the army, and from there he miraculously escaped to Romania and settled in Bucharest.

After the war, the Imrei Chaim returned to Grosswardein to aid the survivors, supporting them financially, emotionally and spiritually. Before the communist takeover of Romania, he left and settled in Antwerp, Belgium.

At the end of Elul 5707/1947, he moved to Eretz Yisrael and settled in Tel Aviv, adjacent to the yeshivah that had been established by his brother, the Damesek Eliezer, who was niftar in 5706/1946. The Imrei Chaim assumed the leadership of Vizhnitzer Chassidus.

He worked fervently to rebuild Vizhnitz and its institutions, and to establish Kiryat Vizhnitz in Bnei Brak.

Reb Chaim Meir was known for his kind heart and passionate ahavas Yisrael; he was always ready to listen to every brokenhearted Yid and eager to help anyone in need.

He was known for his heartfelt and fiery tefillos. People from far and wide would come to be inspired by the Imrei Chaim’s davening all year, and especially on the Yamim Nora’im.

The Imrei Chaim was niftar on 9 Nisan 5732/1972. He was buried in the Vizhnitz ohel in the Zichron Meir cemetery in Bnei Brak, near his father and brothers. His published work is Imrei Chaim on Chumash and mo’adim.

In 1621, the Mayflower sailed from Plymouth Colony in present-day Massachusetts on a month-long return trip to England.

In 1792, President George Washington cast his first veto, rejecting a congressional measure for apportioning representatives among the states.