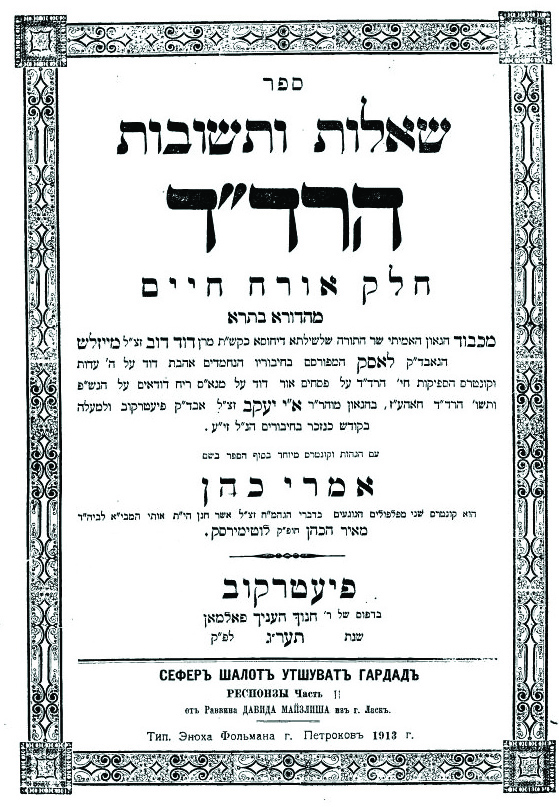 At 11 years of age, he left home to learn under Harav Yaakov Lorberbaum of Lisa, zt”l, the Nesivos Hamishpat.

As one of the foremost bachurim in the yeshivah, he was suggested to Harav Elazar Hakohen, zt”l, son-in-law of the Nesivos Hamishpat, as a shidduch for his daughter. Harav Lorberbaum warmly welcomed the idea.

At 18 Reb Dovid Dov was appointed Rav in Dobri. Later he was Rav in Nashelsk and in Lask, after which town he is called.

Wherever he lived, Reb Dovid Dov headed a yeshivah and taught many talmidim.

Reb Dovid Dov journeyed to the Kotzker Rebbe, zy”a, and was close with the Chiddushei Harim of Ger, zy”a, who said of him that whatever he learns stays in his memory and he doesn’t have to review.

He was a prolific writer on all facets of the Torah. He published Ahavas Dovid on Halachah; Ohr Dovid on Megillas Esther; Chiddushei HaRadad on Maseches Pesachim; Reiach Dudaim on Haggadah Shel Pesach; She’eilos U’teshuvos HaRadad; and Binyan Dovid on Megillas Eichah.

His sons were Harav Tzvi Aryeh Yehudah Yaakov, his successor in Lask; Rav Pinchas Eliyahu, Rav of Rakow and Vierishov; and Rav Mordechai Zev of Tarna.

In 1815, the constitution for the Congress Kingdom of Poland was signed by Russian Czar Alexander I, who was also king of Poland.

In 1942, during World War II, the Vichy French navy scuttled its ships and submarines in Toulon to keep them out of the hands of German troops.

In 1945, General George C. Marshall was named special U.S. envoy to China by President Harry S. Truman to try to end hostilities between the Nationalists and the Communists.