This Day In History 9 Kislev/December 9 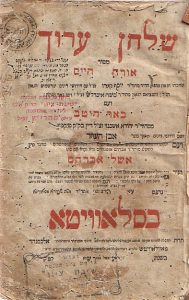 When he was asked to become Rav of Slavita, Reb Moshe accepted under the condition that he would not be paid a salary.

A tzaddik and a talmid chacham, Reb Moshe was close to the Baal HaTanya of Chabad as well as many other Rebbes of the generation.

He supported himself by writing sifrei Torah, a trade he taught himself when he was young. Later, he started making the iron molds for printers to use. Eventually Reb Moshe founded his own press, with the most up-to-date machines available at the time.

This was the beginning of the world-renowned Slavita Press, which printed only sifrei kodesh. It is said that the machines were immersed in the mikveh before use. Many tzaddikim chose to daven and learn Torah from sefarim published by this press, which was best-known for the Slavita Shas.

Reb Moshe took two of his sons, Reb Shmuel Abba and Reb Pinchas, into the business (another son, Reb Mordechai, lived in Shpitikova), and they helped their father print the new Shas. It was a very beautiful edition, according to requests of the Gedolei Hador.

Preparation and printing of the Shas took five years. Because of the extensive work and vast amount of money invested in the project, the Gedolim announced that the Shas was under copyright for the next 10 years, during which it would be forbidden for any press to print Shas.

But when the entire stock of Shas was sold out in a relatively short time, the Vilna Press requested that the copyright expire, even though fewer than 10 years had passed. This caused a difference of opinion among the Rabbanim; some sided with Slavita Press, others with the Vilna.

The end of the Slavita Press was a sad one. One of the non-Jewish binders in their business hanged himself in the factory while drunk. Word spread quickly that the Jewish owners killed him. Due to this slander, the brothers Reb Shmuel Abba and Reb Pinchas were exiled to Kiev. The inquiry into the case was drawn out over three years, during which time the brothers were subjected to much pain and suffering. In the end, the verdict was for them to walk between two rows of policemen who would strike them with their sticks.

After this punishment was carried out (observers were amazed at the serenity of the Shapira brothers during their ordeal), they were sent off to exile in Siberia. When their father, Reb Moshe, heard this, he died of a broken heart.

After much tribulation and a heavy bribe, Czar Nicholas agreed to transmute their sentence to life imprisonment in Moscow. They were in jail in Moscow for 17 years. It was only after Nicholas’s demise, when Alexander II became czar, that they were finally freed, broken in body and spirit. They returned home to Slavita only to find that the press, in which they had invested so much money and energy, was totally destroyed.

In 1958, the anti-communist John Birch Society was formed in Indianapolis.

In 1962, the Petrified Forest in Arizona was designated a national park.