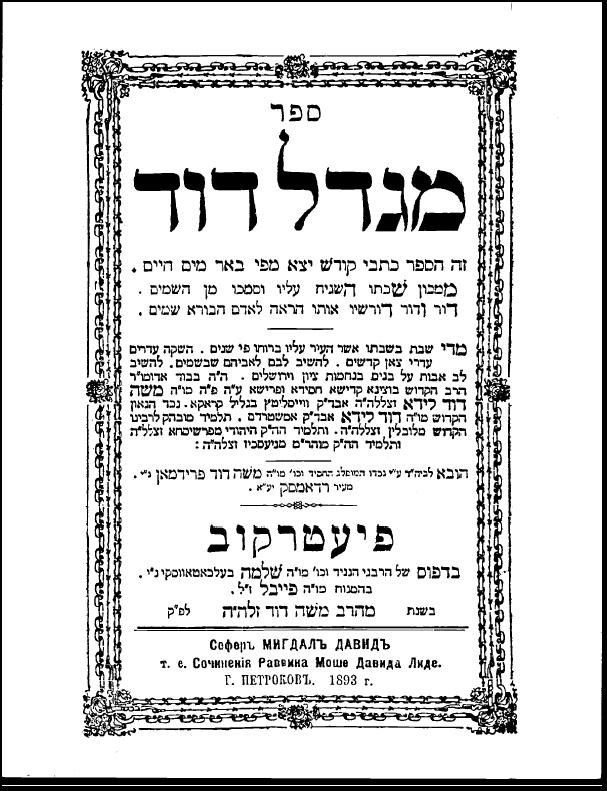 The Mishnah in Taanis enumerates five calamities that took place on this day:

The Romans totally destroyed Yerushalayim. They plowed it under and renamed our holy city Aelia Capitolina.

This is also the day that Yirmiyahu Hanavi was born.

In 5050/1290, in the first-ever national expulsion of Jews, King Edward I expelled all the Jews (numbering approximately 4,000) from England.

In 5252/1492, the Jews of Spain (about 300,000) were expelled by King Ferdinand and Queen Isabella, terminating many centuries of flourishing Jewish life in that country.

In 5754/1994, Arab terrorists exploded a bomb in the Jewish community center (AMIA) in Buenos Aires, Argentina, killing 86 and wounding more than 120.

Harav Moshe David Lida was born in 5540/1780. He was a direct grandson and namesake of Harav Moshe Lida, Rav of Amsterdam, noted mekubal and author of several sefarim.

From his youth, he was noted for his intense tefillah and avodas Hashem.

The Chozeh would send many young Chassidim to learn from the ways and teaching of Reb Moshe David. Among his talmidim were Harav Yitzchak of Vorka; Harav Klonimus Kalman, the Ma’or V’Shemesh; and Harav Meir of Apta, the Or LaShamayim.

Later, Reb Moshe David was appointed Rav in Weisslitz, near Crakow. Although the town was small, it became famous due to the tzaddik who resided there.

Reb Moshe David was noted for his emotional tefillos and for his tzedakah works. Many traveled to him to receive his brachos, which were known to work wonders.

In the summer of 5588/1828, Reb Moshe David traveled to the resort city Altendorf, in Hungary, where he suddenly passed away on the night of Tishah B’Av, at the age of just 48. It has been noted that he thus shares the same yahrtzeit as his Rebbe, the Chozeh of Lublin.

Reb Moshe David was buried there, and his kever became a noted place of tefillah.

His son was Harav Chaim, while his son-in-law, Harav Aryeh Leibish of Zhelichov, succeeded him as Rav in Weisslitz.

Many of his Torah thoughts and talks were compiled and published as Sefer Migdal David.

In 1864, during the Civil War, Union Adm. David G. Farragut led his fleet to victory in the Battle of Mobile Bay, Alabama.

In 1884, the cornerstone for the Statue of Liberty’s pedestal was laid on Bedloe’s Island in New York Harbor.

In 1953, Operation Big Switch began as remaining prisoners taken during the Korean War were exchanged at Panmunjom.

In 1962, South African anti-apartheid activist Nelson Mandela was arrested; it was the beginning of 27 years of imprisonment.

In 1964, U.S. Navy pilot Everett Alvarez Jr. became the first American flier to be shot down and captured by North Vietnam; he was held prisoner until February 1973.

In 1969, the U.S. space probe Mariner 7 flew by Mars, sending back photographs and scientific data.

In 1974, the White House released transcripts of subpoenaed tape recordings showing that President Richard Nixon and his chief of staff, H.R. Haldeman, had discussed a plan in June 1972 to use the CIA to thwart the FBI’s Watergate investigation; revelation of the tape sparked Nixon’s resignation.

In 1994, a three-judge panel of the U.S. Court of Appeals in Washington chose Kenneth W. Starr to take over the Whitewater investigation from Robert Fiske.