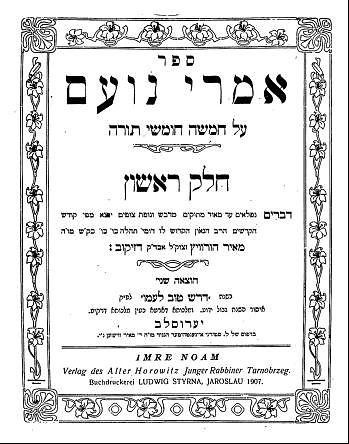 In 5594/1834, Spanish Queen Maria Christina abolished the Spanish Inquisition, which had existed for 300 years.

Harav Meir of Dzikov was born in 5579/1819; his father was Harav Eliezer of Dzikov, son of Harav Naftali of Ropshitz, zt”l. The young Meir merited to know his illustrious grandfather, the heilige Ropshitzer Rav.

Reb Meir was educated by his father and also by his uncle, Harav Asher Yeshaya of Ropshitz, zy”a, one of the Ropshitzer’s sons-in-law. He traveled regularly to Reb Tzvi Hirsch of Rimanov, zy”a, and frequently visited the Divrei Chaim of Sanz, zy”a.

In his youth, Reb Meir was already recognized as a Gadol baTorah, and frequently corresponded on Torah and halachah subjects with Gedolim like Harav Yosef Shaul Nathanson, Harav Shlomo Kluger, and Harav Chaim of Sanz, zy”a.

In 5621/1861, Reb Eliezer was appointed Rav of Dzikov. After the petirah of his father, Reb Meir succeeded him.

During the Imrei Noam’s time there were differences of opinion among the Gedolim over the issue of Jews moving to America, which was then a spiritual wasteland. The Imrei Noam supported those who wished to relocate to the United States, saying, “Even in America, there should resound the words Amen, Yehei Shmei Rabba…!”

He is known by the name of his sefer, Imrei Noam, a number of volumes on Torah, moadim and she’eilos u’teshuvos.

Before the Imrei Noam was niftar, he became extremely weak. His doctors advised him to travel to the health spa of Carlsbad, but Reb Meir did not agree; he preferred to remain at home in Dzikov. His children, though, kept urging him to heed the doctors’ advice.

Finally, the Dzikover Rebbe gave in to their pleas.

He arrived in Carlsbad in 5637/1877 on a Tuesday and the very next day he passed away. By the time his body was brought back to Dzikov for burial, it was already Friday.

The Ahavas Yisrael of Vizhnitz once came into the beis medrash on the yahrtzeit of his father-in-law, the Imrei Noam, and asked those present if they had already recited mishnayos on his father-in-law’s behalf.

The Chassidim were surprised and asked, “Does the Imrei Noam need our mishnayos?”

In answer, the Ahavas Yisroel related that the Imrei Noam had once entered the beis medrash on the yahrtzeit of Reb Naftali of Ropshitz and had asked the young men who were learning if they had learned mishnayos for Reb Naftali. When they expressed surprise, the Imrei Noam explained, “When a person learns mishnayos for the soul of someone who does not need it, the merit of those mishnayos reverts to the learner.”

In 1789, in an event symbolizing the start of the French Revolution, citizens of Paris stormed the Bastille prison and released the seven prisoners inside.

In 1933, all German political parties, except the Nazi Party, were outlawed.

In 1958, the army of Iraq overthrew the monarchy.

In 1999, race-based school busing in Boston came to an end after 25 years.