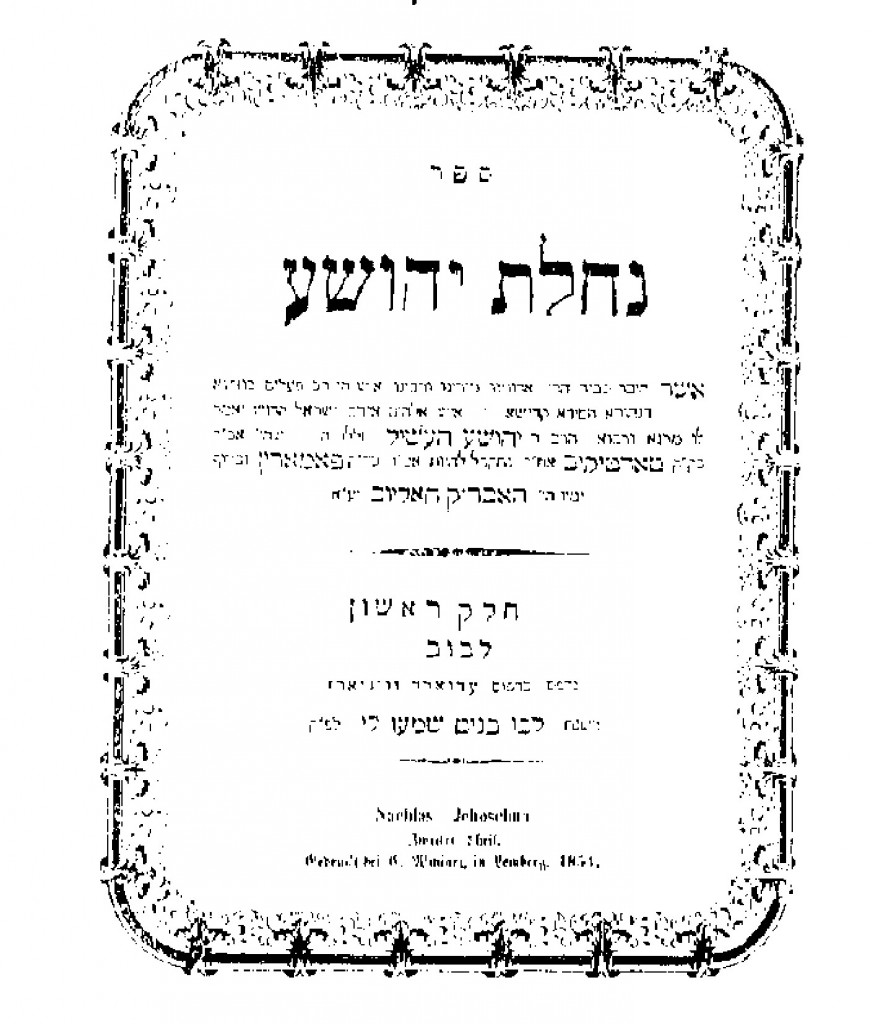 In 5594/1834, Druze mobs attacked the city of Tzfas, killing many Jews, Hy”d. They also burned down a number of shuls and destroyed sifrei Torah.

5706/1946, the noted Agudah askan, Harav Moshe Blau, zt”l. He was niftar on a Mediterranean island near Messina, Sicily, on the way to Europe, and was brought back to Eretz Yisrael for burial.

Harav Yehoshua Heshel was a devoted talmid of the Ohev Yisrael of Apta. He would often trek the long way from his home to his Rebbe by foot, since he had no means to hire a driver. His devotion to his Rebbe was exemplary. In his sefer, he frequently quotes his Rebbe and expounds on his words.

He authored Nachlas Yehoshua on Chumash, which was printed in Lemberg in 5612/1852. Among the haskamos in the sefer, Harav Yosef of Helitch writes about its mechaber: “His vast wisdom and knowledge is indescribable and hard to grasp.”

He first served as Rav in Pamorn, then in Tartikov and later the town of Cholyov, where he eventually became a Rebbe. He drew substantial numbers of chassidim seeking to enrich their spiritual being with the Rebbe’s guidance.

He was survived by his son, Harav Reuven Dovid Efraim. His sons-in-law were Harav Aryeh Leibush Heilprin of Sokolovka, mechaber of Kol Yehudah, and Harav Shlomo Langerman, Rav of Seret and Turka.

The legacy of Cholyov continued to thrive until World War II, when most members of the family were killed al kiddush Hashem. Hy”d.

In 1912, the greatest volcanic eruption of the 20th century took place as Novarupta in Alaska began a series of explosive episodes over a 60-hour period.

In 1934, the Securities and Exchange Commission was established.

In 1944, Allied forces stormed the beaches of Normandy, France, on “D-Day,” beginning the liberation of German-occupied Western Europe during World War II.

In 1968, Sen. Robert F. Kennedy died at Good Samaritan Hospital in Los Angeles, a day after he was shot by Sirhan Bishara Sirhan.

In 1984, government forces in India stormed the Golden Temple in Amritsar in an effort to crush Sikh extremists; at least 1,000 Sikhs and 200 soldiers were killed.

In 1994, President Bill Clinton joined leaders from America’s World War II allies to mark the 50th anniversary of the D-Day invasion of Normandy.