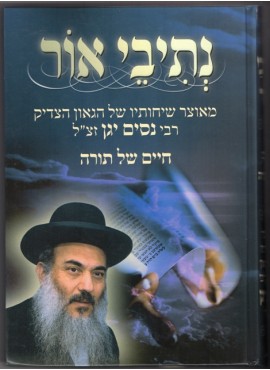 In 5270/1510, Emperor Maximilian of Germany rescinded an order to burn all the sefarim found in Cologne and Frankfurt. Pfefferkorn, a meshumad, had claimed that Jewish literature was insulting to Christianity. The Jews appealed to the emperor to reconsider this edict, and Maximilian agreed to investigate the matter. He appointed Johann Reuchlin, a famed German scholar, to conduct the investigation. Reuchlin demonstrated that the books openly insulting to Christianity were very few and viewed as worthless by most Jews. All other books were needed for Jewish worship, and contained much value in the areas of theology and science. Following this report, the emperor rescinded his edict.

Harav Nissim Yagen was born on 12 Cheshvan 5702/1941, in Yerushalayim. His father, Chacham Yaakov, was a talmid of Harav Yosef Arab, and later of the mekubal, Harav Mordechai Sharabi.

As a youngster, Rav Nissim learned in Talmud Torah Magen David. Later he learned in Yeshivas Marom Shir, where he became close to the Amshinover Rebbe, who suggested that he travel to learn in the yeshivah in Lakewood, under Harav Aharon Kotler. About four years later he returned to Eretz Yisrael, where he married.

As a young avreich, Rav Nissim learned in the kollel dayanus of Harav Zalman Nechemiah Goldberg. He also regularly attended the sichos of Harav Chaim Shmulevitz in Yeshivas Mir.

On Shabbos night Rav Nissim would give shmuessen in his home to bachurim from the Chevron yeshivah on parashas hashavua and other topics.

He went on to found a Torah community of a few hundred families in the city of Zichron Yaakov.

When he returned to Yerushalayim a few years later, he was appointed menahel ruchani of Ohr Somayach, and then Mashgiach in Ohr Baruch, and a Rosh Yeshivah of Ohel Moed.

In 5737/1977, Rav Nissim founded the Kehillas Yaakov kollel for baalei teshuvah, on Yosef ben Mattisyahu Street in Yerushalayim. He later invited avreichim who were not baalei teshuvah to join the kollel. The avreichim would arrive in the yeshivah for Shacharis and eat breakfast in the kollel in order to quickly return to their learning. Rav Yagen would, in turn, offer them an additional stipend for their willingness to begin studies early in the morning.

After the Yom Kippur War, Rav Nissim became a significant figure in the teshuvah movement in Eretz Yisrael and worldwide. He founded Arachim and occupied a senior position there for 10 years. He conducted seminars all over the world and produced 300 cassettes on parashas hashavua and other Torah topics.

A few years before his petirah, he became sick with a devastating illness.

He was buried in the Sephardic chelkah on Har Hamenuchos.

In 1990, South African black nationalist Nelson Mandela and his wife, Winnie, arrived in New York City for a ticker-tape parade in their honor as they began an eight-city U.S. tour.