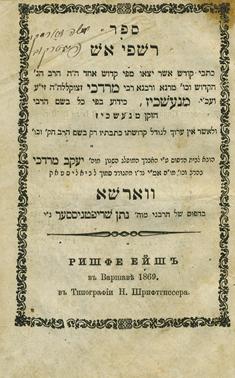 In 4950/1190, the Jews of York, England, were killed by the Crusaders at Clifford’s Tower, after they refused to be baptized. Among the kedoshim were two of Baalei haTosafos, Harav Eliyahu Hakadosh and Rabbeinu Yom Tov, Hy”d. This tragedy occurred on a Friday night, hence the “Cherem of York,” an English tradition forbidding Jews to sleep in the city of York overnight.

5482/1722, Harav Eliyahu Shapira of Prague, zt”l, mechaber of Eliyahu Rabba and Eliyahu Zuta on the Levushim

Harav Mordechai of Neshchiz was born in 5508/1748. His father, Harav Dov Ber, was a grandson of Harav Nosson Nota Shapira, the Megaleh Amukos, and the Rebbe Reb Heschel of Cracow.

Reb Mordechai was taken as a chassan by Harav Yosef of Leshnov. Initially, Reb Mordechai served as Rav in Leshnov. When the Rav of the city of Neshchiz was niftar, the community leaders approached Reb Mordechai and offered him the position; his ancestors had also held the position of Rav in Neshchiz.

Reb Mordechai was a close talmid of Harav Yechiel Michel of Zlotchov, zy”a. It was only after the latter’s petirah that Reb Mordechai was willing to assume leadership and become Rebbe in Neshchiz, a position he held for 11 years.

Reb Mordechai’s court attracted thousands of talmidim and Chassidim, most notable among them Reb Naftali of Ropshitz.

Reb Mordechai of Neshchiz was renowned for his love and mesirus nefesh for mitzvos. Although he was extremely poor, he would put aside a little money each week to be able to buy a beautiful esrog for Sukkos.

Once, on the way to make his purchase, he met a Yid crying bitterly. The man explained that he was a driver and his horse had died. He couldn’t afford to buy a horse and he didn’t know how he would support his family.

Reb Mordechai immediately gave the man all the money he had saved for his esrog. Then he turned to the heavens and said, “There are different ways of beautifying a mitzvah. Whereas other people will recite a brachah on a beautiful esrog, my mitzvah will be beautified by a horse!”

In another sign of his rarefied middos and respect for every Yid, it has been recorded that Reb Mordechai never uttered a negative word about another Yid.

Rav Mordechai was niftar on 8 Nisan and buried in Neshchiz. His divrei Torah were collected in the sefer Rishpei Eish.

In 1818, Congress decided the flag of the United States would consist of 13 red and white stripes and 20 stars, with a new star to be added for every new state of the Union.

In 1864, President Abraham Lincoln, in a letter to Kentucky newspaper editor Albert G. Hodges, wrote: “I claim not to have controlled events, but confess plainly that events have controlled me.”