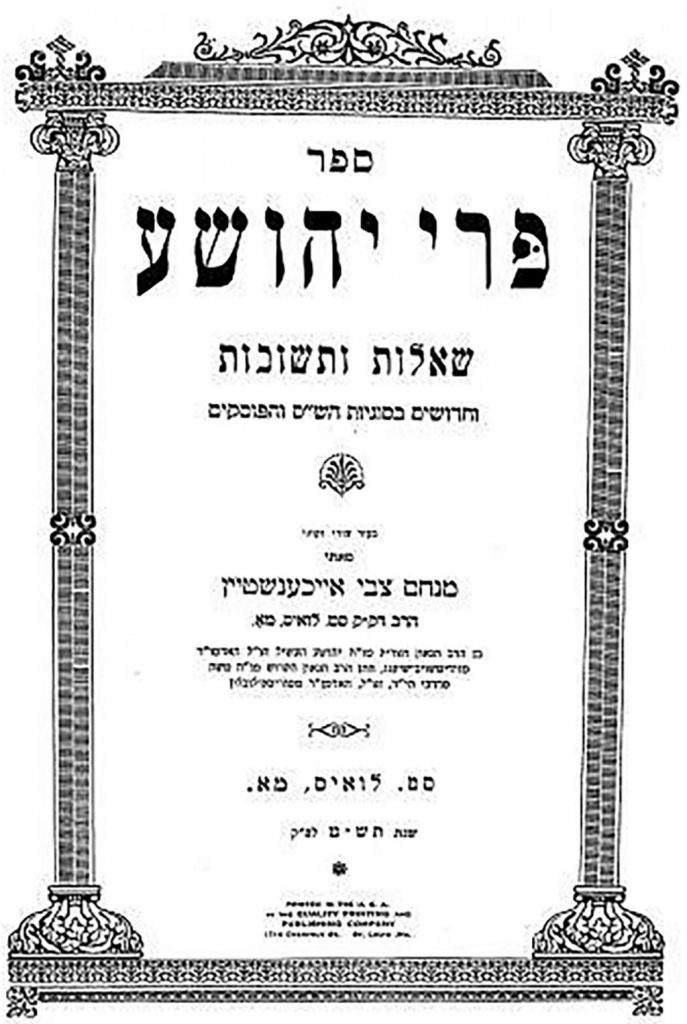 Harav Moshe Mordechai Twersky was born in 5634/1874. His father was Harav Yaakov Aryeh of Trisk, zt”l, a descendant of the holy Chernobyler dynasty.

He was the son-in-law of Harav Asher of Stolin, zt”l, in his zivug rishon, and of Harav Baruch Meir Twersky, zt”l, of Azarnitz in his zivug sheini.

After the petirah of his father, on 28 Iyar 5678/1918, Reb Moshe Mordechai was appointed Rebbe. He moved to Lublin where he was known as Reb Moshe Trisker.

Reb Moshe was best known for his warm tefillos and his sweet voice, which attracted a large crowd of Chassidim to his beis medrash, even though there were no Trisker Chassidim in Lublin before Reb Moshe settled there. His legendary Shalom Aleichem at the tisch on Leil Shabbos drew a large crowd.

Mothers would bring their children to the Rebbe, give him their kvitlach, and the Rebbe would then place his hands on the children’s heads and bestow his brachos on them.

During World War II, the Nazis brutally forced Reb Moshe to wash the floors of his own beis medrash while wearing a tallis.

Harav Avraham Yitzchak Twersky, z”l, a son of Reb Moshe, who spent the war years in London, recounts that he and his brother Harav Baruch Meir, z”l, sent $3,000 through the Polish aid committee in London to the Geneva branch, to arrange that a German SS officer take Reb Moshe from Lublin to neutral Switzerland. Since Switzerland refused to admit Polish refugees unless they had a visa from a third country, the Rebbe’s son-in-law, Harav Menachem Tzvi Eichenstein, zt”l, of St. Louis, sent along a Rabbinic pass with which he was to enter Switzerland, and from there make his final escape.

A German SS officer indeed came to Lublin with the papers to take the Rebbe and his family to Switzerland. But Reb Moshe adamantly refused to go. He sent a letter to the committee in Geneva saying that when the ship is sinking, the captain must remain on board. He must first save the lives of the passengers and then his own — and not the opposite! He would stay with all the other Jews in Poland…

His divrei Torah were printed in Ohel Moshe together with Sefer Hayachas Chernobyl and Ruzhin. They were later reprinted as an appendix to the sefer Pri Yehoshua by Harav Eichenstein, his son-in-law.

In 1886, at Haymarket Square in Chicago, a labor demonstration for an eight-hour workday turned into a deadly riot when a bomb exploded.

In 1904, the United States took over construction of the Panama Canal from the French.

In 1961, the first group of “Freedom Riders” left Washington, D.C., to challenge racial segregation on interstate buses and in bus terminals.