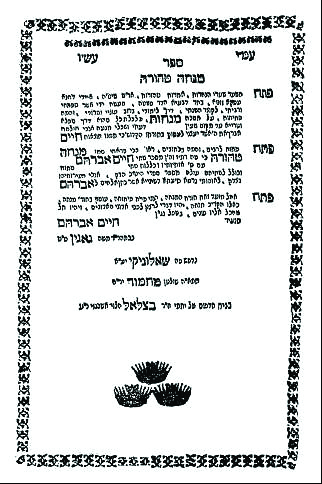 In 4856/1096, the Jews of Speyer, Germany, were massacred during the First Crusade. This event occurred on Shabbos. Hashem yinkom damam.

5424/1664 Harav Shimon, Rav of Lvov, and Harav Mordechai and Harav Shlomo, the sons of the Taz, along with many other prominent Rabbanim and parnassim, Hy”d, were killed al kiddush Hashem in Lvov. See further in the sefer Melitzei Aish.

Harav Avraham Chaim Gaghin was born in Constantinople in 5547/1787. His father, Harav Moshe, moved the family to Eretz Yisrael when Avraham Chaim was still a child. Learning in yeshivos in Yerushalayim, the boy’s great lamdanus was quickly noted; at a young age, he wrote Minchah Tehorah on Maseches Menachos.

After the passing of his first wife in 5588/1828, Rav Chaim Avraham married the daughter of Harav Avraham Shalom Sharabi, who was among the leading mekubalim in Yerushalayim.

In 5594/1834, following the petirah of Harav Avraham Maghar, Rav Chaim Avraham was chosen to daven at the amud in his place, a position of importance among the mekubalim.

Subsequently, with the petirah of Harav Yehudah Navon, zt”l, in 5602/1842, Rav Chaim Avraham was appointed Rishon LeTzion. He was the first Rishon LeTzion to be certified at this post by the Turkish Empire.

As Rav, Rav Chaim Avraham enacted many takanos for the benefit of the community. He distributed all the money he received among the needy.

Besides his communal activities, Rav Chaim Avraham was also active in disseminating Torah. He wrote numerous sefarim, among them the previously mentioned Minchah Tehorah on Maseches Menachos; Chaim MiYerushalayim, a compilation of his drashos on the Torah; and She’eilos U’teshuvos Chukei Chaim.

In 1607, English colonists arrived by ship at the site of what became the Jamestown settlement in Virginia (the colonists went ashore the next day).

In 1918, the first U.S. airmail stamp, costing 24 cents and featuring a picture of a Curtiss JN-4 biplane, was publicly issued. (On some of the stamps, the “Jenny” was printed upside-down, making them collector’s items.)

In 1940, in his first speech as British prime minister, Winston Churchill told Parliament, “I have nothing to offer but blood, toil, tears and sweat.”

In 2002, President George W. Bush announced that he and Russian President Vladimir Putin (POO’-tihn) would sign a treaty to shrink their countries’ nuclear arsenals by two-thirds.