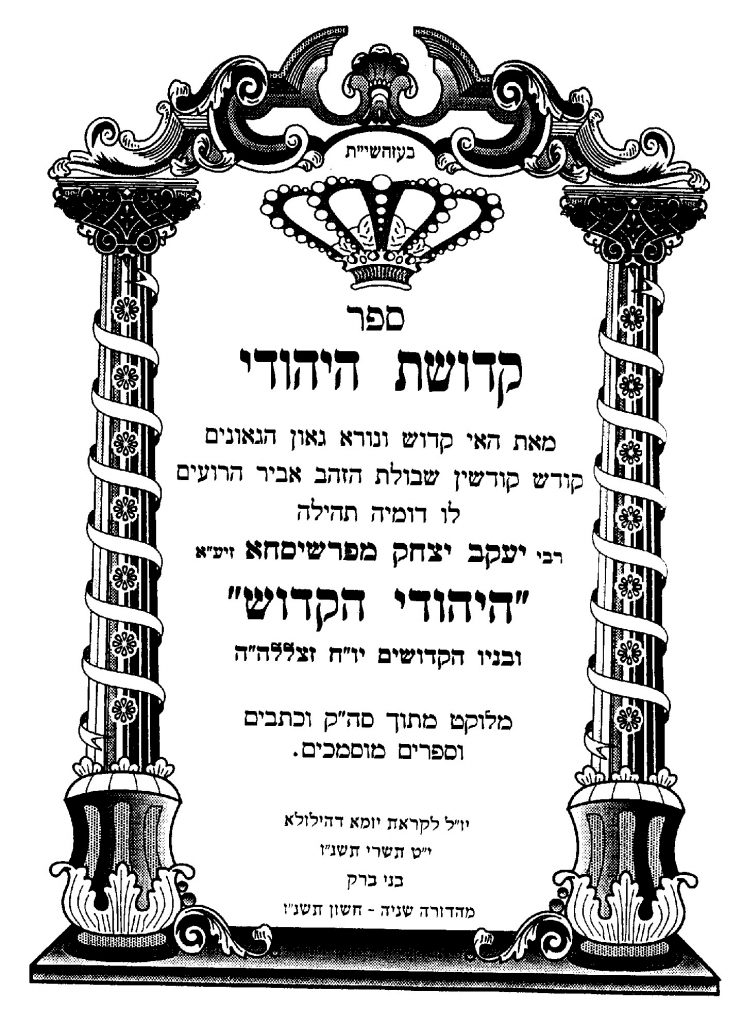 In 4856/1096, the Jews of Speyer, Germany, were massacred during the First Crusade. This event occurred on Shabbos. Hashem yinkom damam.

5424/1664 Harav Shimon, Rav of Lvov, and Harav Mordechai and Harav Shlomo, the sons of the Taz, along with many other prominent Rabbanim and parnassim, were killed al kiddush Hashem in Lvov. See sefer Melitzei Aish. Hashem yinkom damam.

Harav Yerachmiel was born in 5544/1784. His father was Harav Yaakov Yitzchok, zy”a, the Yehudi Hakadosh of Pshischa.

For 13 years during his father’s lifetime he occupied himself as a watchmaker, a profession in which he was an expert. In this way he concealed his spiritual greatness from the eyes of the public. He conducted himself in an extremely humble and hidden manner, to such an extent that his father’s chassidim did not have an inkling of his greatness.

He was very diligent in honoring his holy father, the Yehudi Hakadosh, who was known for his extraordinary mesirus nefesh for avodas Hashem. Once his father requested him to bring forth a burning coal, so he could light his lilke (pipe). Rav Yerachmiel tossed the coal back and forth between his hands until he placed it into the pipe. It was later revealed that in order to be mekayem kibbud av with his own hands he had severely burnt himself. This story was retold by his brother, Harav Nechemia, Rebbe of Bichov, zy”a.

Harav Chaim Meir of Mogilnetze, zy”a, likened the 13 years that Rav Yerachmiel spent as a watchmaker to the 13 years Rabi Shimon Bar Yochai and his son spent hiding in the ma’arah, in which they detached themselves totally from the mundane concerns of this world.

After his father’s petirah on Sukkos of 5574/1813, most of his father’s chassidim followed the leadership of his prime talmid, the Rebbe Harav Bunim of Pshischa, zy”a. Nevertheless, a group of chassidim chose to become loyal to Rav Yerachmiel and they devoted themselves wholeheartedly to their Rebbe. Rav Yerachmiel initially refused, but eventually the chassidim prevailed.

The Rebbe Rav Bunim and Rav Yerachmiel lived in the same city, and had great respect and deference for each other.

Rav Yerachmiel is buried in the ohel that also shelters his father and the Rebbe Rav Bunim of Pshischa, in the town of Pshischa, Poland.

In 1789, President-elect George Washington and his wife, Martha, moved into the first executive mansion, the Franklin House, in New York.

In 1915, the A.C.A. became the National Advisory Council on Aeronautics (NACA).

In 1969, Sirhan Sirhan was sentenced to death for assassinating Sen. Robert F. Kennedy. (The sentence was later reduced to life imprisonment.)

In 1985, the Coca-Cola Co. announced it was changing the secret flavor formula for Coke (negative public reaction forced the company to resume selling the original version).