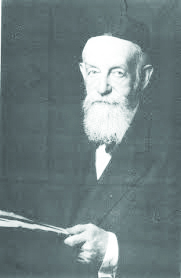 In 5446/1685, the shul of Beracha veShalom on the Jodensavanne (“the Jews’ savannah”) in the Dutch colony of Suriname was dedicated. This was one of the first shuls in the Western Hemisphere.

In 5481/1720, the shul of Rabbeinu Yehudah Hechassid, with its 40 sifrei Torah, was set ablaze by Arabs, thus marking the tragic end of his group’s ascending to Eretz Yisrael. The rebuilt shul was destroyed by the Jordanians in 5708/1948.

Moreinu Harav Yaakov Rosenheim was the only son of Rabbi Elias Rosenheim and his wife, Charlotte, née Kaufmann, who lived in Frankfurt. His parents were among the strongest supporters of Orthodoxy in Frankfurt and staunch followers of Harav Samson Raphael Hirsch, zt”l.

Harav Yaakov married Gertrude, née Strauss, whose father was the Karlsruhe banker Samuel Strauss. Rechov Strauss in Yerushalayim is named after him due to his philanthropic activities in Eretz Yisrael.

From 1906 to 1935, Rav Rosenheim was editor of The Israelite and chairman of the Jewish Religious Society in Frankfurt. He was a talented writer and gifted spokesman. As a follower of Harav Samson Raphael Hirsch, he personified Torah im derech eretz. When he was asked, as communal head in Frankfurt, to lead Agudas Yisrael, an organization created to combat secularism, he threw himself into his mission wholeheartedly, using all his talent and skill.

In later years he immigrated to England. Then, from 1941 to 1950 he lived in the United States, after which he went on to live in Bnei Brak. He was niftar on 8 Cheshvan at the age of 95.

In 1938, Nazis looted and burned synagogues as well as Jewish-owned stores and houses in Germany and Austria in a pogrom that became known as “Kristallnacht.”

In 1965, the great Northeast blackout that began as a series of power failures lasting up to 13-1/2 hours left 30 million people in seven states and part of Canada without electricity.

In 1976, the U.N. General Assembly approved resolutions condemning apartheid in South Africa, including one characterizing the white-ruled government as “illegitimate.”