This Day In History 7 Teves/January 5 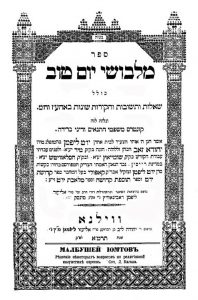 Harav Yom Tov Lipman Hakohen Baslavsky was born in Slutzk in 5581/1821. His father, Rav Yehudah Ze’ev, was the son of Rav Shabsi, a Dayan in Slutzk, whose father, Rav Noach, was the mechaber of an important work on the Torah. (Unfortunately, the manuscript was burned in the house of his grandson Reb Lipa in Chislavichi when a fire broke out there in 5634/1874.)

The mother of Reb Yom Tov Lipman was a daughter of the famous Rav Betzalel, a son of Rav Yom Tov Lipman, Rav of Kapulya and author of Kedushas Yom Tom, who had been close to the Vilna Gaon.

Reb Yom Tov Lipa, or, as he was fondly known, Reb Lippele, was known as an iluy while still young.

At 17 he married the daughter of Reb Shimon Zeimel of Slutzk.

Reb Yom Tov Lipa’s first rabbanus, in Shumyachi, was a position he held for 11 years. He also headed the local yeshivah, the largest in the region.

From there he moved to Chislavichi, where he lived for the next nine years (until 5634/1874). When his wife passed away there, he married the daughter of Reb Yaakov Leib of Molestoyka.

After the fire that broke out in Chislavichi, Reb Yom Tov Lipa became Rav of Mir, serving also as Rosh Yeshivah. Among his talmidim was Harav Isser Zalman Meltzer, zt”l, a native-born Mirrer.

Fluent in the works of all the Rishonim, Reb Yom Tov Lipa’s expertise in Torah and halachah was well known, as were his activities for the klal. This resulted in an invitation to take part in the Rabbinical conference in St. Petersburg of 5640/1880 under the leading Gedolim of the time: Harav Yitzchak Elchanan Spektor of Kovno, Harav Eliyahu Chaim Meizel of Lodz, and the Beis Halevi of Brisk, zecher tzaddikim livrachah.

The discussions at the conference centered on the needs of the people and the problems of the young generation.

In 1895, French Capt. Alfred Dreyfus, convicted of treason, was publicly stripped of his rank. He was ultimately vindicated.

In 1905, the National Association of Audubon Societies for the Protection of Wild Birds and Animals was incorporated in New York State.

In 1949, in his State of the Union address, President Harry S. Truman labeled his administration the Fair Deal.

In 1957, President Dwight D. Eisenhower proposed assistance to countries to help them resist Communist aggression in what became known as the Eisenhower Doctrine.