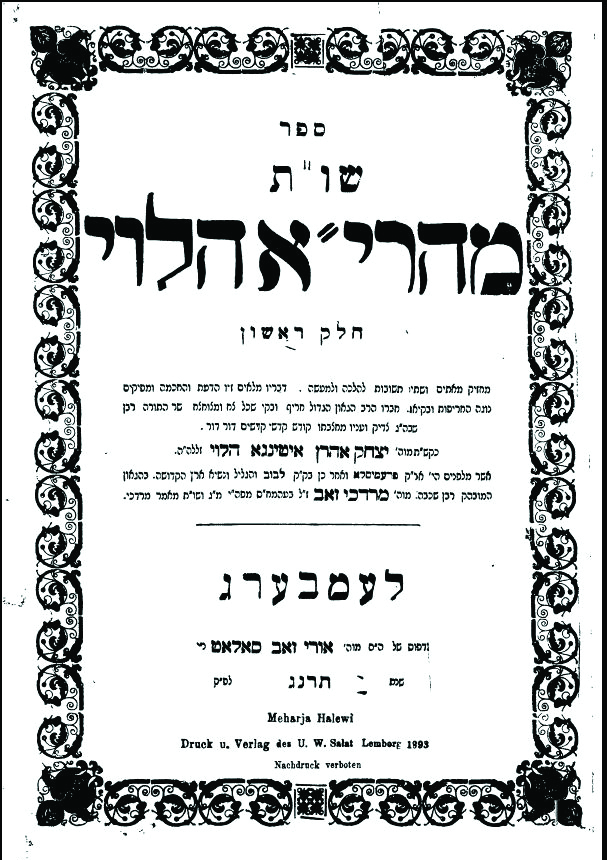 Harav Yitzchak Aharon Halevi Itinga was the son of Harav Mordechai Ze’ev, mechaber of Mefarshei Hayam and other sefarim. He was born on 11 Sivan 5587/1827 in Lvov (Lemberg).

At the age of 13 he received an unheard-of honor: to deliver a drashah in the main shul of Lvov. All who attended were astounded by the young bachur’s memory, and spellbound by his command of the entire Torah.

A few days later his uncle, Harav Tzvi Hirsh Orenstein, the Rav of the city, wrote him a letter noting his grasp of halachah and enclosing a semichah.

Reb Yitzchak Aharon was known for his exemplary middos, especially his humility.

He became Rav of Premislau, but after the petirah of Harav Tzvi Hirsh Orenstein, Rav of Lvov, Reb Yitzchak Aharon was chosen to be his successor.

As the head of the most prestigious community in the area, Reb Yitzchak Aharon also held the position of Nasi of Eretz Yisrael, and was responsible for the collection and distribution of all tzedakah funds earmarked for the poor of the Holy Land.

In 1815, the Battle of New Orleans took place with Andrew Jackson defeating the British army in the closing engagement of the War of 1812.

In 1912, the African National Congress was founded in Bloemfontein.

In 1918, President Woodrow Wilson outlined his 14 points for peace after World War I.

In 1923, France began military occupation of the Ruhr valley in Germany.

In 1926, ibn Saud became king of Hejaz upon King Hussein’s expulsion and changed the name of the kingdom to Saudi Arabia.

In 1959, Charles de Gaulle assumed the presidency in France, inaugurating the Fifth Republic.

In 1964, President Lyndon Johnson declared an “unconditional war on poverty in America.”

In 1972, Bangladesh leader Sheik Mujibur Rahman arrived in London after being released by Pakistan and appealed for recognition of his new nation.

In 1973, secret peace talks between the United States and North Vietnam resumed near Paris.

In 1974, the Khmer Rouge in Cambodia intensified pressure on Phnom Penh with strikes north and south of the capital.

In 1982, settling an antitrust lawsuit from the Justice Department, the American Telephone and Telegraph (AT&T) monopoly divested itself of the 22 regional Bell System companies.

In 1990, an East German official disclosed that 60,000 members of the secret police were still on the government’s payroll despite the previous month’s pledge that the organization would be dismantled.

In 1991, four Belgians held captive for three years by a Palestinian group in Lebanon were released.

In 1993, the deputy prime minister of Bosnia was shot to death by Serbian gunmen while Serbian rebel leaders considered an international peace settlement.

In 1995, Russian troops pounded Chechnya with rocket and mortar fire.

In 1998, Ramzi Yousef, an Arab of uncertain nationality, was sentenced to life in prison plus 240 years for masterminding the World Trade Center bombing in New York that killed six people in 1993.

In 2001, lawmakers in Manila said they would decide by Feb. 12 whether to impeach the Philippine president, speeding a trial that had battered the economy and set the country on edge.