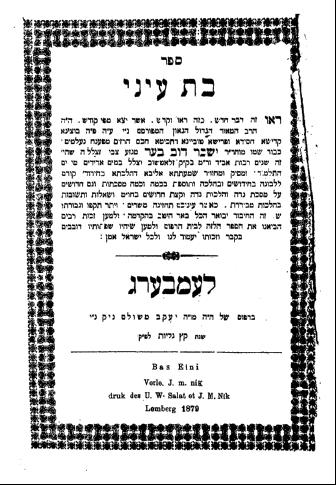 Harav Yissachar Dov Ber was the son of Harav Aryeh Leibish, and a descendant of Harav Naftali Katz, the Semichas Chachamim. He was the son-in-law of Harav Tzvi Hirsh Peretz of Levertov.

After settling in Levertov, Rav Yissachar Ber joined the group of famed Chassidim, including Rav Levi Yitzchak of Berditchev, who were also sons-in-law of the Peretz family, originally from Spain.

Influenced by a cousin, Harav Aryeh Leibish Peretz, Rav Yissachar Ber and Rav Levi Yitzchak would journey to the court of the Maggid of Mezeritch and, after his petirah, to Rav Yechiel Michel of Zlotchov.

In 5554/1794, Rav Yissachar Ber started on his way to Eretz Yisrael, arriving there in 5555/1795. He settled in Tzfas, as instructed in a letter from Rav Avraham of Kalisk to the Chassidim in Europe.

Rav Yissachar Ber was niftar on 7 Av of that same year, and is buried near the Alshich in Tzfas. Among his talmidim was Rav Chaim of Chernowitz, the Be’er Mayim Chaim.

Rav Yissachar Ber wrote Mevaser Tzedek on the Torah, in which he quotes the divrei Torah of the fathers of the Chassidic movement: the Baal Shem Tov, the Maggid, the Zlotchover Maggid, Rav Levi Yitzchak of Berditchev, and others; and Bas Eini, chiddushim on Gemara and halachah.

In 1909, the steamship SS Arapahoe became the first ship in North America to issue an S.O.S. distress signal, off North Carolina’s Cape Hatteras.

In 1962, Andrian Nikolayev became the Soviet Union’s third cosmonaut in space as he was launched on a 94-hour flight.

In 1975, the United States vetoed the proposed admission of North and South Vietnam to the United Nations, following the Security Council’s refusal to consider South Korea’s application.

In 1997, President Bill Clinton made the first use of the historic line-item veto, rejecting three items in spending and tax bills. (However, the U.S. Supreme Court later struck down the veto as unconstitutional.)