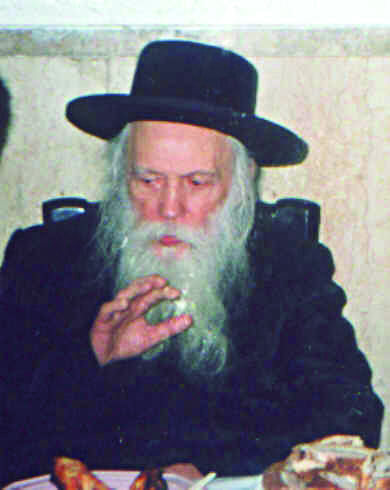 Harav Avraham Dovid Horowitz was born on 22 Cheshvan 5672/1911 in Bolkhov, Galicia. His father, Harav Yehudah, was the Rav of the town, as had been his grandfather, Harav Aharon Meir. His maternal grandfather was Harav Pinchos Levi Horowitz, the Kossover Dayan and mechaber of Pischa Zuta and Beis Pinchas, one of the leading talmidim of the Divrei Chaim of Sanz and the Gorlitzer Rebbe.

Harav Avraham Dovid was orphaned at an early age; his mother passed away when he was three, and his father when he was nine years old, in 5682/1922. He grew up in the home of his grandfather in Grosswardein, and was considered a young iluy, to the delight of his grandfather, who trusted him to publish his sefarim. He would daven with such fervor that parents and educators pointed to him as an example.

In Grosswardein Harav Avraham Dovid became close to the Ahavas Yisrael of Vizhnitz; he later served as Rosh Yeshivah of Yeshivas Vizhnitz in Grosswardein.

He was familiar with all facets of Torah, Shas and Poskim, having learned the Shach, Taz and Magen Avraham on all four parts of the Shulchan Aruch by heart.

In 5694/1934 he married the daughter of Harav Eliezer Lipa Zilberman, the Ratzferter Rebbe, and grandson of the Gorlitzer Rav. Afterwards he sat on the Grosswardein beis din, along with Harav Yitzchak Yaakov Weiss, the Minchas Yitzchak.

When World War II broke out, Harav Avraham Dovid was taken to the concentration camps, where he lost his wife and five children, Hy”d. He inspired all those around him not to lose hope.

After the war he made the revival of European Jewry his life’s mission; with his uncle the Sanz-Klausenburger Rebbe, zy”a, he worked to revive Torah life. He was appointed Rav of Landsberg and Augsburg in Germany, where he published the first siddur in postwar Europe.

In 5707/1947, he was appointed Rav of Kehillas Adas Yisrael of Strasbourg, France, where he did much to strengthen the postwar community. He married the daughter of Harav Yechezkel Weidman, Rav of Sitchel.

He authored a nine-volume work on the Torah called Kinyan Torah.

In 1945, the second Sino-Japanese war, between China and Japan, formally ended when 1,000,000 Japanese troops surrendered to China.

In 1948, the Democratic People’s Republic of Korea (North Korea), was declared, to the alarm of the non-communist world..