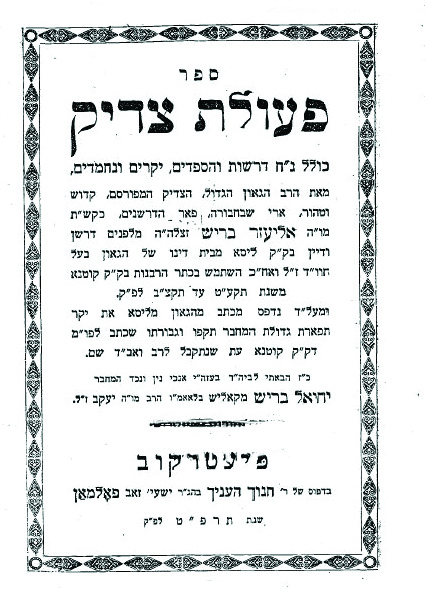 In 3884/123 C.E., the Tanna Rabi Akiva was arrested by the Romans. He was subsequently tortured and killed al kiddush Hashem on Yom Kippur. The story of his killing, along with the other nine Harugei Malchus, is related in the stirring piyut Eleh Ezkerah, recited during the Yom Kippur davening.

A taanis tzaddikim was established to commemorate this event, as well as the killing of 20 other Jews at that time. (Shulchan Aruch 580:2)

The city of Lisa was known in those years as a fortress of Torah. It was renowned for its famed geonim, who became Rabbanim and Dayanim in many kehillos.

The Rav and Rosh Yeshivah at that time was Harav Teveli, who taught thousands of bachurim in his yeshivah. Among them was Rav Eliezer.

In 5552/1792, Rav Eliezer married the daughter of Rav Yehudah from Lisa. After his marriage, Rav Eliezer founded his own yeshivah, and in a short time he was asked to become the maggid and darshan of the kehillah.

Many kehillos requested him to serve as their Rav. Rav Eliezer, in his humility and his love for his home town, ignored these tempting offers.

Years later, in 5579/1819, when the kehillah of Kutna was seeking a new Rav, they agreed to support him and his family and to fully support a yeshivah as well. It was difficult for Rav Eliezer to leave his home town for good; it was also difficult for the members of the kehillah, who felt very close to him. But he made the decision to move on.

In Kutna, Rav Eliezer was a strong leader. He also headed a large yeshivah, where he delivered deep shiurim on many sugyos. His derech halimud was to write down all the difficulties he found with the sugya and then delve into its depths, answering all the questions.

Some of his drashos and hespeidim were published under the name Pe’ulas Tzaddik.

His son-in-law was Harav Shmuel Brish — a nephew — who was Rav in Iniava.

In 1789, the first United States Congress adopted 12 amendments to the Constitution and sent them to the states for ratification. (Ten of the amendments became the Bill of Rights.)

In 1932, the Spanish region of Catalonia received a Charter of Autonomy. (However, the Charter was revoked by Francisco Franco at the end of the Spanish Civil War.)

In 1956, the first trans-Atlantic telephone cable officially went into service with a three-way ceremonial call between New York, Ottawa and London.