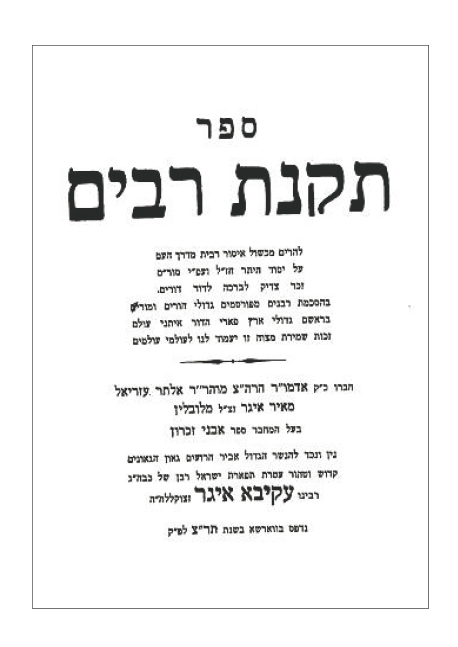 In 5528/1768, during the Haidamack uprising against the Russian government, approximately 50,000 Ukrainian Jews were killed in the city of Uman and the surrounding area, Hy”d.

Rav Ezriel Meir was born on 25 Shevat 5633/1873 and raised in the court of his holy grandfather, the Toras Emes, who hired special melamdim for his gifted grandson.

At a young age he was engaged to the daughter of Harav Chaim Rokeach, zt”l. After the chasunah he sat al haTorah v’al ha’avodah. Later, Rav Ezriel Meir went into the iron-working business. He was successful, eventually becoming very wealthy. His total immersion in davening and learning continued and he gave away huge sums to tzedakah.

After the Shevet Yehudah was niftar on 22 Teves 5674/1914, Rav Shlomo, the older brother, refused to become Rebbe. Rav Ezriel Meir eventually consented to succeed his father in Lublin.

Rav Shlomo eventually headed a court in Krushnik. During World War I he fled to Lublin, where he reestablished his Chassidus in his father’s beis medrash, while Rav Ezriel Meir relocated to another section of the city. He moved several times, to Pilov, Warsaw and Otwock, later returning to Lublin.

In 5673/1913, he and his brother founded a Lubliner Yeshivah by the name of Ahavas Torah.

Rav Ezriel Meir was known as a lamdan and a posek. He published a few booklets on halachic matters; the better-known ones were Hatza’as Takanah Nechutzah and Takanas Rabbim. In Takanas Rabbim, Reb Ezriel Meir introduces the idea of writing an annual heter iska for businessmen, which would alleviate the aveirah of Jews taking interest from one another in business. In his hakdamah he writes that since he himself had been a businessman, he knows the difficulties in exercising care in these matters.

In Elul 5699/1939, the Germans attacked Lublin; thousands were killed and wounded during the battle. The Eiger family suffered severely at the hands of the Nazis. They moved to Warsaw at the onset of the war. Rav Ezriel Meir took ill due to the harsh conditions and was niftar on 5 Tammuz, 5701/1941. He was buried in Warsaw.

His son Harav Shlomo Elazar, Hy”d, became Rebbe for a very short time, until he was killed along with many others al Kiddush Hashem.

In 1778, American forces entered Philadelphia as the British withdrew during the Revolutionary War.

In 1812, the United States Congress approved, and President James Madison signed, a declaration of war against Britain.

In 1815, Napoleon Bonaparte met his Waterloo as British and Prussian troops defeated the French in Belgium.

In 1940, during World War II, British Prime Minister Winston Churchill urged his countrymen to conduct themselves in a manner that would prompt future generations to say, “This was their finest hour.”