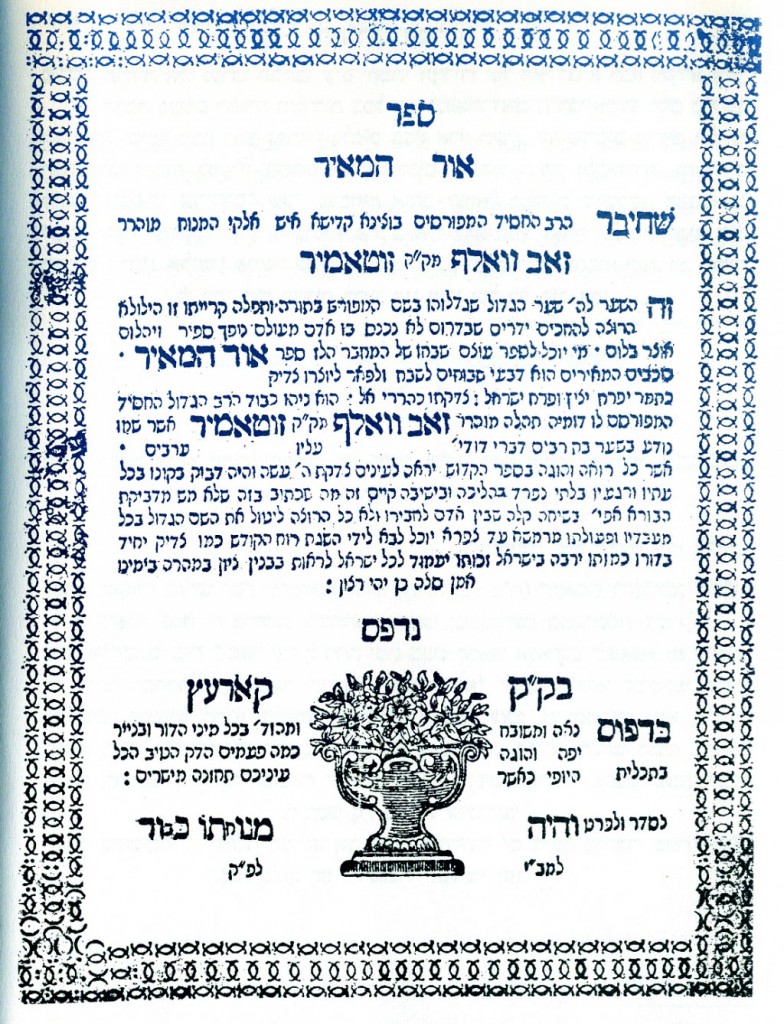 In 5488/1728, the brothers Chaim and Yehoshua Reizes of Lemberg, Hy”d — charged with bringing an apostate back to Judaism — were tortured and executed.

Harav Ze’ev Wolf Halevi, maggid in Zhitomir, was one of the closest talmidim of the Maggid of Mezeritch.

Like many other Gedolim of his era, early biographical details are sketchy.

He was drawn to the ways of Chassidus in his younger years and traveled to the court of the Maggid in Mezeritch. From then on, he was totally devoted to the ways and avodas Hashem he learned from his Rebbe. Among the Chassidim of the Maggid who were close with Reb Ze’ev Wolf were Harav Menachem Mendel of Vitebsk and Harav Aharon of Karlin.

Initially, Reb Ze’ev Wolf did not wish to support himself through Torah, so he opened a wine business.

The Mezeritcher Maggid, seeing the greatness of his talmid Reb Ze’ev Wolf, and noting how he spoke to the other Chassidim, instilling in them middos tovos, avodas Hashem and Chassidus, appointed Reb Ze’ev Wolf as a maggid in his home town of Zhitomir to expound on Torah and teach the public.

Besides serving as maggid, Reb Ze’ev Wolf was noted for his exalted ways, and many talmidim and Chassidim gathered to hear his pearls of wisdom. He founded a beis medrash in Zhitomir.

Reb Ze’ev Wolf was close to Harav Yaakov Yosef of Polnoa, the Toldos Yaakov Yosef, from the time they were both in the court of the Maggid of Mezeritch; and to Harav Zushe of Anipoli, who became his mechutan when his son Rav Yosef married Reb Zushe’s granddaughter.

The many divrei Torah and drashos of Reb Ze’ev Wolf were written down by his talmid Harav Eliezer, the shochet of Zhitomir. Reb Zev Wolf’s sefer, Ohr HaMeir, has been accepted as one of the fundamental Chassidic works, and it was one of the earliest to be printed. Many of the divrei Torah are from the Mezeritcher Maggid.

His sons from his first zivug were Harav Yisrael Dov Ber, the son-in-law of Harav Chaim of Krasna, who succeeded his father in Zhitomir; Harav Menachem Mendel; Harav Tzvi Hirsh; and Harav Yosef.

In 1621, the Dutch West India Company received its charter for a trade monopoly in parts of the Americas and Africa.

In 1948, the 200-inch reflecting Hale Telescope at the Palomar Mountain Observatory in California was dedicated.

In 1965, astronaut Edward White became the first American to “walk” in space during the flight of Gemini 4.