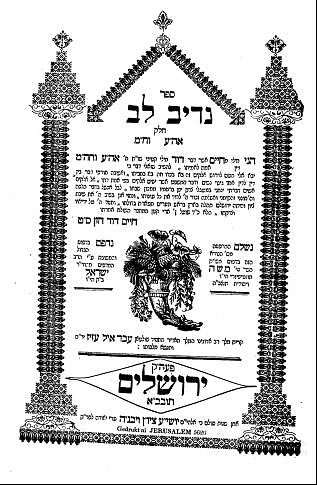 In the time of the Beis Hamikdash, on this day (70 days before Pesach) barley would be planted so it would be ready for the korban Omer.

In 2516, the last of the Zekeinim, who continued the unbroken chain of the mesorah, were niftar. Today is a Taanis Tzaddikim commemorating that event. According to some, it took place on 8 Shevat. (See Shulchan Aruch 580:2 and commentaries.) Another opinion states that the incident occurred 17 years later, in 2531 (see Shabbos 105b and Seder Hadoros, “Yehoshua”).

In 5500/1740, the Jews of Sicily and Naples were invited to return from exile by Charles of Bourbon.

He was a talmid of his father in his youth. Even then his bright future in halachah could be discerned, as he was already writing teshuvos.

In Shevat of 5600/1840, with the petirah of his brother Harav Eliyahu Rachamim, zt”l, Rav Chaim Dovid was appointed Chief Rabbi of the city. He held this position for the next 15 years.

At the age of 64, Rav Chaim Dovid fulfilled his heart’s desire and moved to Eretz Yisrael, settling in Yerushalayim. There, his gadlus in Torah was apparent and he was appreciated for the talmid chacham that he was. Rav Chaim Dovid was accepted and beloved by all.

Rav Chaim Dovid wrote many sefarim: Toras Zevach on hilchos Shechitah; Nediv Lev, his two-part sefer on she’eilos u’teshuvos; Yetev Lev, his drashos; and Yishrei Lev, his halachic rulings on all four parts of Shulchan Aruch. His other writings were lost in Yerushalayim in 5626/1866.

As Rishon leTzion, Rav Chaim Dovid was often asked to write haskamos for the sefarim that were published during his tenure.

In 1908, President Theodore Roosevelt proclaimed the Grand Canyon National Monument (it became a national park in 1919).

In 1935, aviator Amelia Earhart began an 18-hour trip from Honolulu to Oakland, California, that made her the first person to fly solo across any part of the Pacific Ocean.

In 1964, U.S. Surgeon General Luther Terry issued “Smoking and Health,” a report which concluded that “cigarette smoking contributes substantially to mortality from certain specific diseases and to the overall death rate.”

In 1989, nine days before leaving the White House, President Ronald Reagan bade the nation farewell in an address, saying of his eight years in office, “We meant to change a nation and instead we changed a world.”