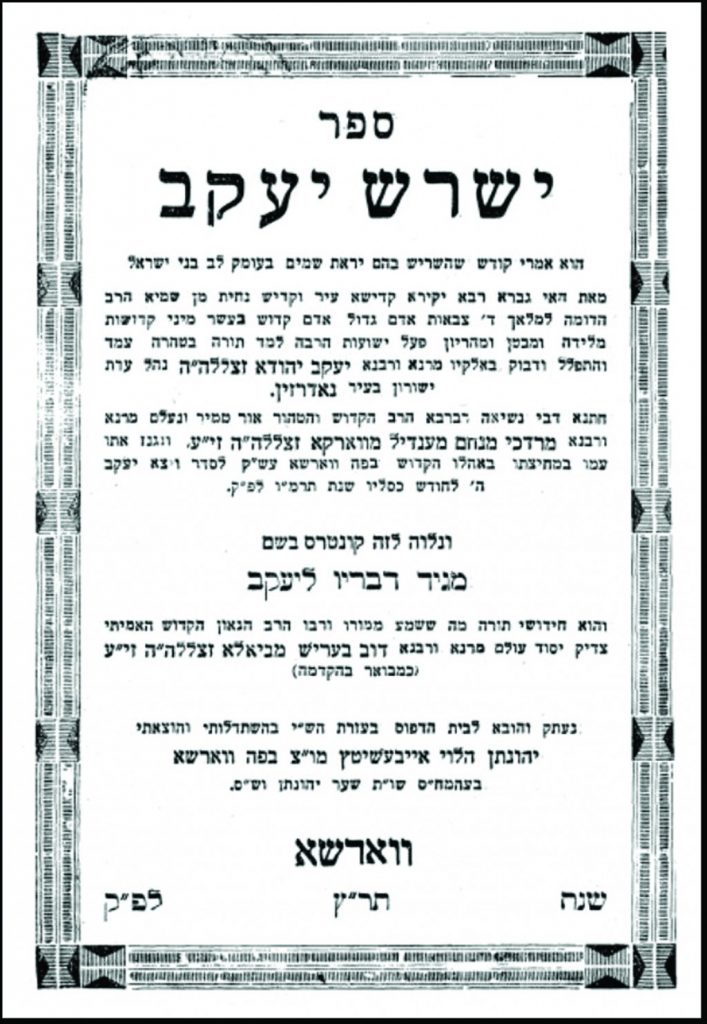 In 5258/1497, the Jews were expelled from Portugal by order of King Manuel I. (The actual decree of expulsion was announced earlier, but the grace period ended on this date.)

In his younger years, Reb Yaakov Yehudah traveled to the court of Reb Yitzchak of Vorka, the founder of the Vorka dynasty, and was counted among the most devoted Chassidim there. He was also known as an outstanding lamdan.

When he reached the age of shidduchim he received many offers; but ultimately, he married the daughter of his Rebbe, Harav Menachem Mendel of Vorka.

Reb Yaakov Yehudah was remarkable in that he would distribute to tzedakah vast sums of money that could not in any normal way reach such a small town as Nadrezin.

About his stringencies in the mitzvah of bassar v’chalav, it is related that Reb Yaakov Yehudah had different sets of clothing for eating milchigs and for eating fleishigs. He would also wait 24 hours between eating meat and milk. Another chumrah that he had was that a bottle that was used at the table while eating milchig foods was not used while eating meat. All his chumros were based on the Shulchan Aruch.

In his later years, Reb Yaakov Yehudah became very weak and was niftar on 5 Kislev 5646/1885 after a short illness. He was succeeded by his son Reb Chaim.

In 1945, five U.S. Navy torpedo bombers mysteriously disappeared after taking off from Fort Lauderdale, Florida, on a training mission, with the loss of all 14 crew members. “The Lost Squadron” contributed to the legend of the Bermuda Triangle.

In 1955, the American Federation of Labor and the Congress of Industrial Organizations merged to form the AFL-CIO under its first president, George Meany.

In 1962, the United States and the Soviet Union announced a bilateral space agreement on exchanging weather data from satellites, mapping Earth’s geomagnetic field and cooperating in the experimental relay of communications.