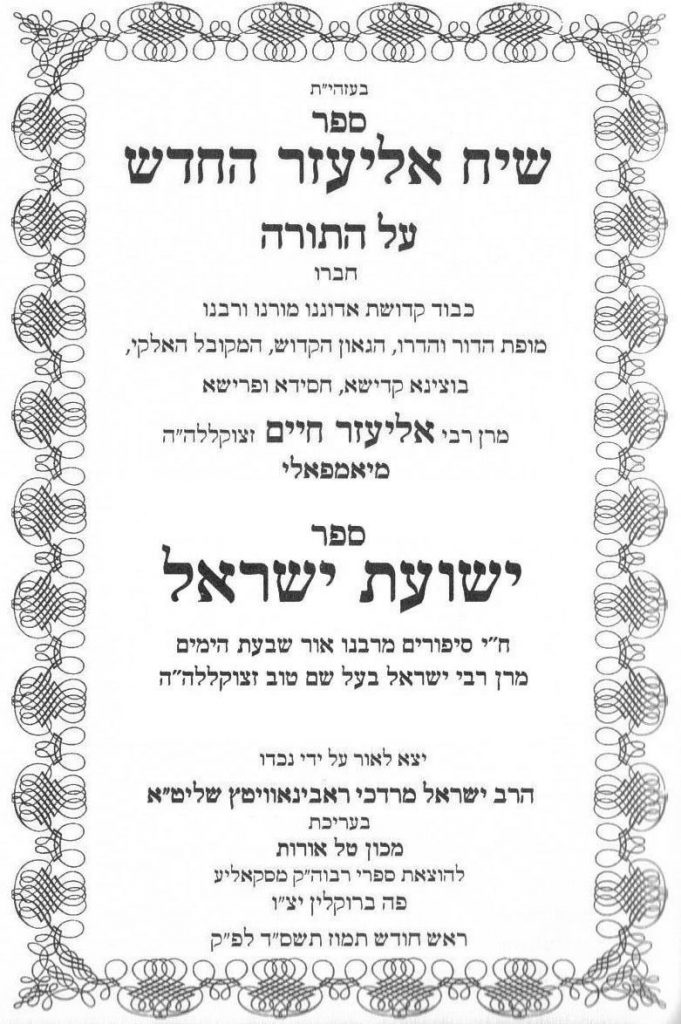 5559/1799, Harav Yeshaya Pik, author of the additional hagahos of Mesores Hashas, and author of She’eilas Shalom and other sefarim.

Reb Baruch and his Rebbetzin were childless for many years. Once, he visited Harav Meir of Premishlan, zy”a, for Shavuos. Reb Meir’l gave him a brachah for children, a bottle of olive oil and a blanket, and told him that when his child would be born he should rinse him with the oil and wrap him in the blanket, promising the child longevity.

When Eliezer Chaim was only 13, his father was niftar, and he and his mother returned to her hometown of Yass, Romania. There he studied under Harav Menachem Nachum of Stefenesht, zy”a (the son of Harav Yisrael of Ruzhin, zy”a) for five years.

After Rav Eliezer Chaim succeeded his father as Rebbe, he would travel around to his chassidim. While still in his 20s, he once passed through Sanz where he tried to hide his identity. However, Harav Chaim, the Rebbe of Sanz, zy”a, recognized his greatness and spent a few hours with him. Rav Chaim declared that his name, Eliezer Chaim, is the same gematria as Dovid ben Yishai and that his neshamah is a nitzutz of Dovid Hamelech.

His grandson, Harav Dovid Yitzchok Eizik, the Skolya Rebbe, zy”a (son of Harav Baruch Pinchas, who was Rebbe in Skolya, Galicia), related that Rav Eliezer Chaim would say Tikkun Chatzos nightly with a niggun from the Baal Shem Tov.

When his Rebbetzin was niftar in 5649/1889, he traveled to America and resided in New York. He was the first chassidishe Rebbe to do so.

He was buried in Mount Judah Cemetery in Cypress Hills, Queens. Many people still come to his kever to daven for yeshuos.

His sefer, Siach Eliezer, was first published in 5633/1873 and has been reprinted a few times. In 5744/1984 it was issued with the addition of Yeshuos Yisrael, which contains 18 stories about the Baal Shem Tov written by the Rebbe. It was republished in recent years.