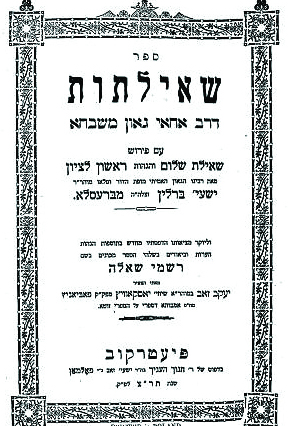 In 5560/1800, a decree was issued prohibiting Russian Jews from importing books.

Harav Yeshayah Berlin was born in 5479/1719 in Eisenstadt. His father, Harav Yehudah Leib Mochiach, was Rav in Pressburg.

In his youth he learned under his father; later, under Harav Tzvi Hirsch Halberstadt.

Rav Yeshayah was the son-in-law of the naggid Harav Wolf Pik from Breslau, in whose honor he added “Pik” to his surname. His father-in-law supported him generously, enabling Rav Yeshayah to continue to grow in Torah. Rav Yeshayah was renowned for his amazing memory for sources and cross-references in the entire Shas.

Rav Yeshayah authored many sefarim, but he is undoubtedly best known for his Mesores Hashas (printed in square brackets in the text of the Gemara) and his other notes printed in the margins. He also wrote Kashos Meyushav, She’eilas Shalom on the She’iltos and Omer Hashikchah on halachos that aren’t discussed by the poskim. His other sefarim include Yesh Seder Lamishnah on Mishnayos; Haflaah Sheba’Arachin, on Sefer Ha’aruch; Kattan Shehigi’a L’chinuch on Sefer Hachinuch and Minei Targuma on Targum Onkelos on the Torah.

A talmid chacham endowed with an incredible memory, Rav Yeshayah was also a wealthy man. His home was a place where talmidei chachamim and Gedolim would get together to discuss Torah topics. The Shaagas Aryeh once paid him a visit and, noting his greatness in Torah, wondered how a person could be so wealthy yet so erudite in Torah.

Rav Yeshayah corresponded with many of the Gedolim of his time, including the Noda B’Yehudah and Harav Yosef Steinhart, his brother-in-law, mechaber of Zichron Yosef.

In 1707, the Kingdom of Great Britain was created as a treaty merging England and Scotland.

In 1805, the state of Virginia passed a law requiring all freed slaves to leave the state, or risk either imprisonment or deportation.

In 1971, the intercity passenger rail service Amtrak went into operation.