In 5560/1800, a decree was issued prohibiting Russian Jews from importing books. 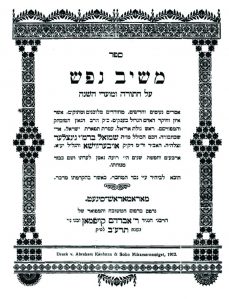 Harav Shmuel Shmelke Gintzler was born in 5598/1838, in Ujhel. His father was Harav Moshe Yehudah Leib.

As a child, young Shmuel Shmelke was already noted for his memory and learning abilities.

He learned in the yeshivah of his brother-in-law Harav Avraham Yehudah Hakohen Schwartz, zt”l, the Kol Aryeh (who had married his sister). He delved into Shas and poskim, and was noted for his hasmadah.

Rav Shmuel Shmelke married the daughter of the naggid Reb Yitzchak Aryeh Kahana of Oibervishe, who was the son-in-law of Harav Yehudah Kahana, zt”l, the Kuntres Hasfeikos. After his wedding, Rav Shmuel Shmelke lived near his father-in-law and devoted himself to Torah.

At the age of 18, Rav Shmuel Shmelke was appointed Rav in Oibervishe, where he served as Rav until his petirah.

He wrote chiddushim on the Torah and Shas, and She’eilos U’teshuvos. His sefer Meishiv Nefesh contain his thoughts on the Chumash.

In 1792, France declared war on Austria, marking the start of the French Revolutionary War.

In 1968, Pierre Elliott Trudeau was sworn in as prime minister of Canada.

In 1977, the U.S. Supreme Court, in Wooley v. Maynard, ruled 6-3 that car owners could refuse to display state mottoes on license plates, such as New Hampshire’s “Live Free or Die.”