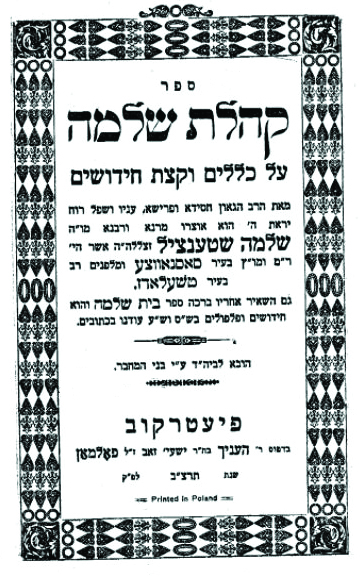 At the age of 11 he learned under Harav Efraim Tzvi Einhorn, zt”l, Rav of Amstov, and later under Harav Yaakov Yosef Rabinowitz, zt”l, Rav of Klobitzik, who regarded him highly. He continued on to the yeshivah of the Avnei Nezer of Sochatchov, zy”a.

Rav Shlomo married in the summer of 5662/1902 at the age of 18. At 21 he was appointed Rav in Tshelodz, where he served for four years. Later he became Rav in Sosnovtza, where he also headed a yeshivah.

Rav Shlomo was renowned for his tremendous hasmadah; he was never seen without a sefer in front of him.

An interesting feature of Rav Shlomo’s avodas Hashem was his daily cheshbon hanefesh. From the time he got married he wrote down each night how many hours he had learned during the day, and whatever he missed from his regular sedarim he would make up on the following days. Reading this journal is a lesson in utilizing one’s every minute. He also recorded the level of his middos day by day.

Of his many chiddushim the only published work was Koheles Shlomo, on the rules of psak in halachah and other topics. Published after his petirah, it has many warm haskamos as well as an introduction by both Rav Shlomo’s children and his father.

In 1882, the nation’s first Labor Day was celebrated with a parade in New York. (Although Labor Day now takes place on the first Monday of September, this first celebration occurred on a Tuesday.)

In 1939, four days after war had broken out in Europe, President Franklin D. Roosevelt issued a proclamation declaring U.S. neutrality.