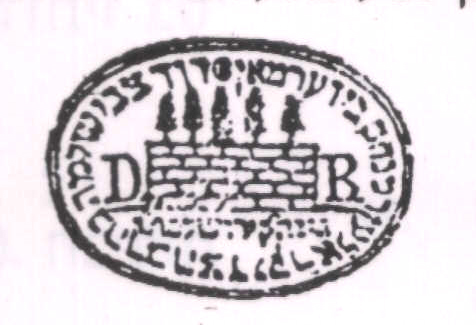 In 3334, Yechezkel Hanavi received a nevuah including the passuk, “And I will remove your heart of stone …” (Yechezkel 8:10).

When he was six years old, his father and grandfather ascended to Eretz Yisrael. On their way out of Poland they traveled to Harav Yisrael of Ruzhin, zy”a, who grabbed the boy’s hand and said: “This boy will never sin; he has clear and lechtige eyes!”

Rav Dovid Tzvi Shlomo received his chinuch in Yerushalayim, in the hallowed atmosphere of his grandfather’s court, the court of Lelov in Yerushalayim.

However, Reb Dovid did not remain in Yerushalayim; seeking more intensive Torah and Chassidus, he returned to Europe. He visited many Rebbes, but became a devout follower of Harav Aharon of Karlin, the Beis Aharon, and followed his minhagim.

After returning to Yerushalayim, he continued his avodas hakodesh and was recognized as a leading chassidic figure. He married the daughter of Harav Noach Pinchas of Magrov, zt”l.

With his father’s sudden petirah in 5643/1883, Rav Dovid was forced to accept the yoke of leadership. As Rebbe, he was esteemed among all Yerushalmim. In the Karlin style, his davening was fiery and uplifting.

He headed Kollel Poland, was a founder of Yeshivas Chayei Olam, and helped establish the Batei Warsaw residential complex.

Rav Dovid was a close yedid of Harav Yosef Chaim Sonnenfeld, zt”l, Rav of Yerushalayim. Once, when Rav Yosef Chaim’s daughter was in needed an urgent yeshuah, he contacted Rav Dovid for a segulah. B’chasdei Hashem, the yeshuah came swiftly.

He led his eidah for thirty-five years. When he was seventy-four years old, he contracted a severe lung infection from which he did not recover. He was buried on Har Hazeisim.

His divrei Torah were printed in Likutei Divrei Dovid.

In 1858, a telegraphed message from Britain’s Queen Victoria to President James Buchanan was transmitted over the recently laid transatlantic cable.

In 1861, President Abraham Lincoln issued Proclamation 86, which prohibited the states of the Union from engaging in commercial trade with states that were in rebellion — i.e., the Confederacy.

In 1923, Carnegie Steel Corporation put into place the eight-hour workday for its employees.