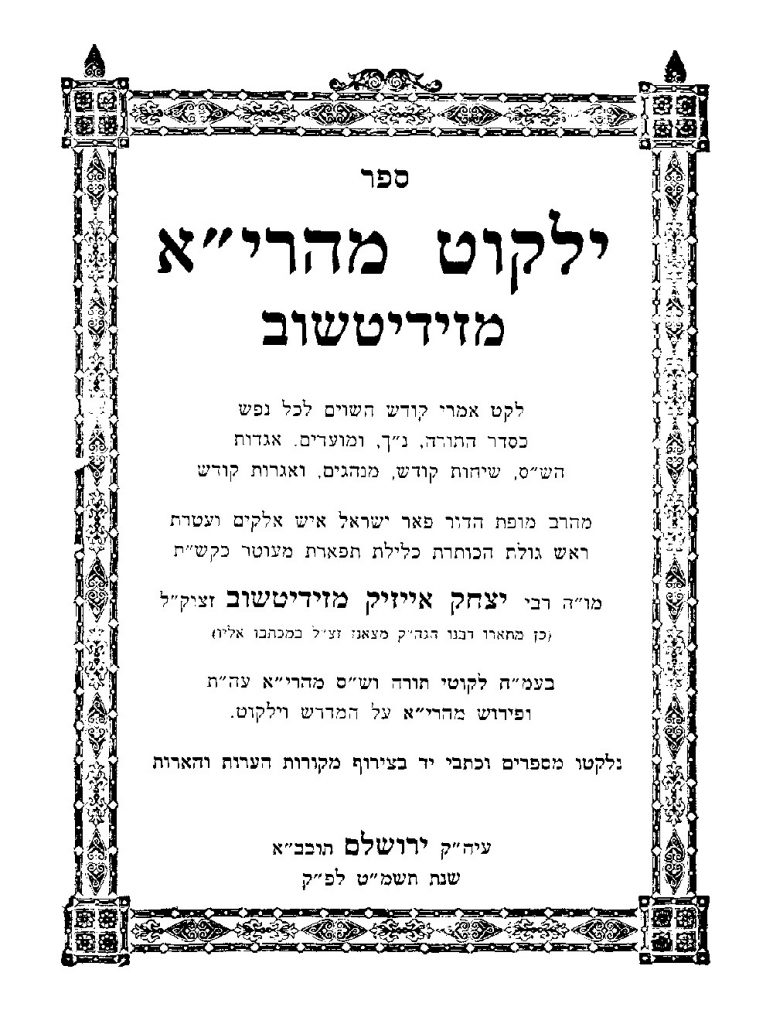 5444/1684, Harav Moshe Ravkash, zt”l, mechaber of Be’er Hagolah on Shulchan Aruch. According to some, his yahrtzeit is on 13 Tammuz.

5599/1839, Harav Yisrael of Shklov, zt”l, mechaber of Pe’as Hashulchan, and Taklin Chadatin on Maseches Shekalim, who led the aliyah to Eretz Yisrael of the Vilna Gaon’s talmidim.

Harav Yitzchak Eizik of Ziditchov was born in Ziditchov, Galicia, in 5565/1805. He was the only son of Harav Yissachar Berish, a talmid of the Chozeh of Lublin and the brother of Harav Tzvi Hersh, the first Rebbe of Ziditchov.

The family traced its lineage to the Tosafos Yom Tov.

Rav Yitzchak Eizik was a very close disciple of his uncle, Rav Tzvi Hersh, and in his sefarim he constantly mentions his Torah thoughts.

Rav Yitzchak Eizik’s unparalleled hasmadah and memory were amazing, and from the age of 14 until his petirah, a night did not pass without him being deeply engrossed in profound Torah study.

Although he lived a life of poverty, he constantly traveled to the great Rebbes of his generation to quench his great spiritual thirst.

After the petirah of Rav Tzvi Hersh, Rav Yitzchak Eizik spent much time imbibing Torah and Chassidus from another uncle, Harav Moshe of Sambur. He also traveled to Harav Naftali of Ropshitz, Harav Meir of Premishlan and Harav Shalom of Belz, among others.

Although he never wanted to become a Rav, he was apparently destined to become a Rebbe. After the petirah of Harav Yehudah Tzvi of Rozdol, he accepted the invitation to become the successor of the Ziditchov chassidus.

Among his primary talmidim were Harav Yosef Meir of Spinka and Harav Shalom Mordechai Hakohen Schwadron, the Maharsham of Berzon.

The Rebbe was fluent in Zohar and sifrei Kabbalah and would often recite entire pages by heart. He was the mechaber of a peirush on Midrash; Likutei Torah V’haShas, on sefer Bamidbar; and Yalkut Maharya on Yalkut Shimoni.

In 5749/1989, the sefer Yalkut Maharya was published for the first time. It contains minhagim, letters and his divrei Torah, collected from various sources by his descendants Rav Shimon Hirschler and Rav Moshe Leib Weiser of London. His toldos are printed in the sefer Pe’er Yitzchak.

In 1215, England’s King John put his seal to Magna Carta (“the Great Charter”) at Runnymede.

In 1934, President Franklin D. Roosevelt signed an act making the National Guard part of the U.S. Army in the event of war or national emergency.