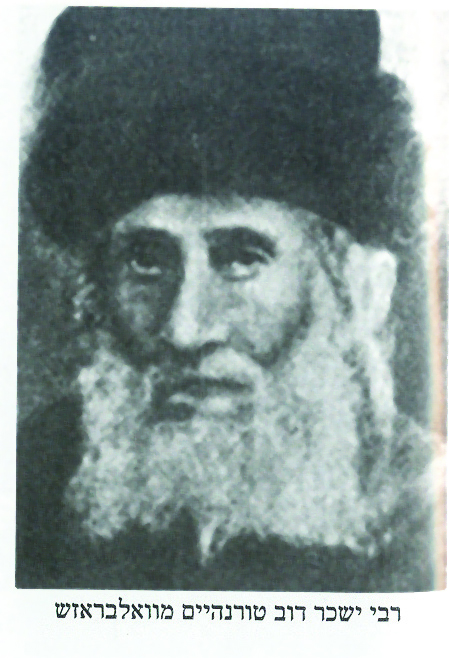 Harav Yissochor Dov Ber Torenheim was born in 5563/1803 in Piotrkov. After he was orphaned of his father, Rav Moshe, his mother devoted herself to the chinuch of her talented son.

After his marriage to the daughter of Harav Avraham Tzvi of Volbrozh, zy”a, Rav Yissochor Ber moved to the yeshivah of Harav Shalom Tzvi of Zgierzh, zt”l, and under his influence he journeyed to Harav Menachem Mendel of Kotzk, zy”a.

However, he did not become a Chassid of the Kotzker Rebbe. He was an ardent Chassid of Harav Chaim of Walbraum, Harav Yissochor Ber of Radoshitz and Harav Chaim Meir Yechiel of Mogelnitza, zechusam yagein aleinu, the latter whom he considered his Rebbe, and at whose court he stayed for about half of each year.

In 5609/1848, with the petirah of Harav Chaim Meir Yechiel of Mogelnitza, many Chassidim considered Rav Yissochor Ber as his successor, but he refused to accept leadership. Rather, he subordinated himself to Harav Elazar of Kozhnitz, zy”a.

Later, in 5622/1862, with the petirah of Rav Elazar at a young age, Rav Yissochor Ber was appointed Rebbe. For Rosh Hashanah 5623/1862, many hundreds of Chassidim flocked to his court in Volbrozh.

As Rebbe, Rav Yissochor Ber practiced many new customs. He would daven at the amud nearly all of the tefillos, even on weekdays; every Wednesday the Chassidim would recite the entire sefer Tehillim in public. In general, his leadership style was one of grandeur, much like Ruzhiner Chassidus, which was quite a novelty in Poland.

Rav Yissochor Ber refused to take money from his Chassidim; rather, he supported his family from a business that his Rebbetzin ran. He would eat very little himself. Most of his day was dedicated to learning and davening, and he would only receive his Chassidim to give advice and brachos after tikkun chatzos.

Rav Yissochor Ber spoke divrei Torah often, full of classic Chassidus, aside from his erudition in Shas and Poskim. He was also very knowledgeable in Kabbalah and would quote it often. Many of his divrei Torah are contained in Avodas Yissochor on the Torah. His son Harav Akiva Meir of Lukov also wrote down some of his father’s talks, published as Imrei Binah on the Torah and Seder Hazmanim on the zemanim.

Rav Yissochor Ber was niftar on the second day of Rosh Chodesh Cheshvan 5638/1877 in Volbrozh. In accordance with his tzavaah, he was buried in his birthplace, Piotrokov.

In 1635, religious dissident Roger Williams was banished from the Massachusetts Bay Colony.

In 1872, Aaron Montgomery started his mail order business with the delivery of the first mail order catalog. The firm later became Montgomery Wards.

In 1930, Laura Ingalls became the first woman to fly across the United States as she completed a nine-stop journey from Roosevelt Field, NY, to Glendale, California.

In 1967, Latin American terrorist Che Guevara was executed while attempting to incite a revolution in Bolivia.