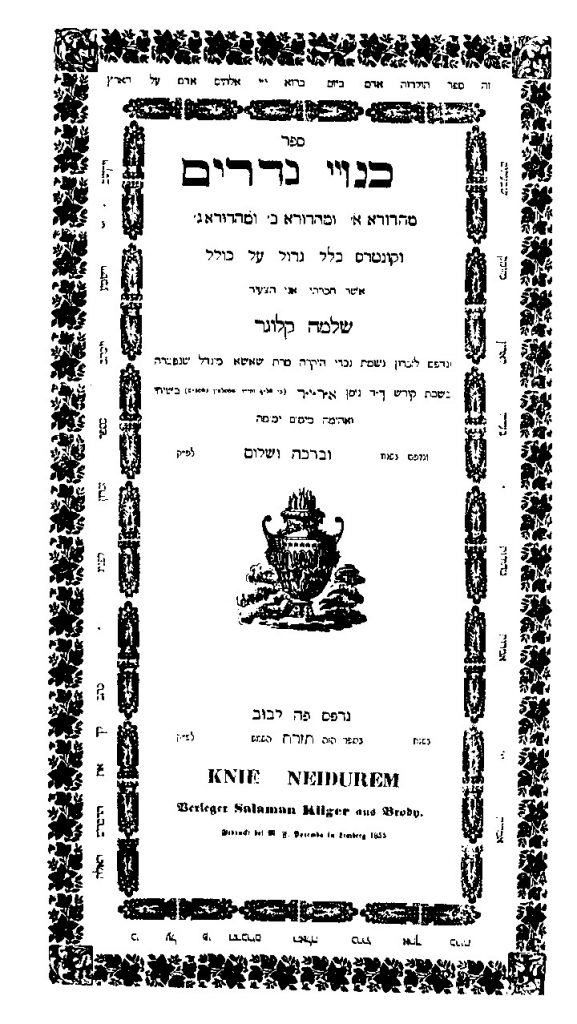 5341/1581, Harav Moshe Najara, zt”l, student of the Arizal and mechaber of Lekach Tov on Rashi

Harav Shlomo Kluger was born in 5546/1786 to Harav Yehuda Aharon of Komarov, in a shtetl near Zamosc, Poland. By the age of 10 he was so far ahead of the other children due to his extraordinary mind that his father taught him privately for a few years.

When he was 14, his pious father was suddenly niftar, and his mother sent him to Zamosc to study in the yeshivah of Harav Mordechai Rabin, zt”l. There he became close to Harav Yaakov Krantz, the Dubner Maggid, zt”l, and to Harav Yosef Hoichgelernter, the Mishnas Chachamim, zt”l.

The Dubner Maggid was especially fond of this talmid and learned a special seder of Midrash with him every Friday.

In time, the young Shlomo became known as an iluy and would spend much time writing his chiddushim.

Even as a young man, he was consulted by the Rabbanim in Ravva, and his opinions carried weight in halachic discourse.

After the petirah of his father-in-law, he tried to support himself as a shopkeeper but was not successful. The Yeshuos Yaakov instructed him to become a Rav in Kolki. Later, he moved to Yosefov, Poland. Finally, in 5580/1820, he became Dayan and Maggid in Brody, where he remained for more than 50 years.

When he arrived there he visited Harav Efraim Zalman Margules, zt”l, the Rav of the city. After meeting with him, Rav Efraim Zalman declared, “No one has ever bested me in a Torah discussion as he has!”

Rav Shlomo vehemently fought the maskilim, whose influence had begun to be felt in Brody during his tenure, combating any endeavor to change minhagim.

Once Harav Yitzchak of Volozhin, zt”l, declared to Harav Efraim Zalman that Rav Shlomo did not wash negel vasser! He explained that he was amazed that Rav Shlomo had written so many sefarim; a feat seemingly impossible if he also slept at night!

The list of his works numbers no less than 136, each one containing at least two hundred pages, as he himself wrote in the introduction to Tikkun Olam. Fifteen chiburim were published in his lifetime and an equal number after his petirah; more than one hundred remain in manuscript form.

In 1888, Congress created the Department of Labor.

In 1927, Charles Lindbergh was honored with a ticker-tape parade in New York City for flying across the Atlantic Ocean in 33 hours.

In 1966, the Supreme Court issued its landmark Miranda decision, ruling that criminal suspects had to be informed of their constitutional rights prior to questioning by police.