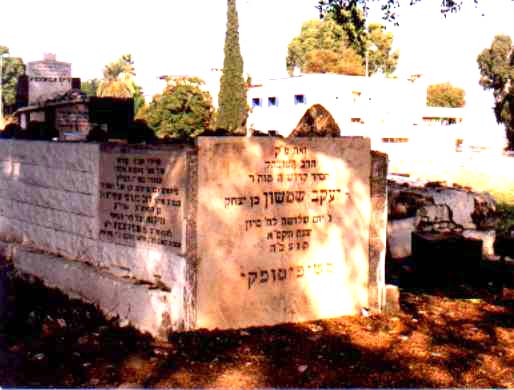 In 2449, Moshe Rabbeinu conveyed Bnei Yisrael’s affirmative reply to Hashem, as they prepared themselves for Mattan Torah.

In 3828, Vespasian Caesar, father of Titus, captured Yericho and killed its inhabitants.

In 4856, Crusaders massacred Jews of Magentze (Mayence, Germany) today and again on 6 Sivan.

In 4925, the Rambam reached Eretz Yisrael safely after a turbulent journey. He designated this day as a personal Yom Tov.

5490, Harav Yosef Irgas of Livorno, Italy, zt”l, mechaber of Divrei Yosef and Shomer Emunim (According to some, his yahrtzeit is 20 Sivan.)

Harav Yaakov Shimshon was the son of Harav Yitzchak, zt”l, the Rav of Slavita, who was a descendant of Harav Shimshon of Ostropole, zt”l, and carried his name.

He was a disciple of the Maggid of Mezritch, zy”a, and of Harav Pinchas of Koritz, zy”a, and a close friend of Harav Boruch of Mezhibuzh, zy”a.

Rav Yaakov Shimshon served as Rav in the towns of Ber, Slavita, Uman, and Shipitivka, where thousands flocked to him for guidance.

In 5554/1794, he ascended to Eretz Yisrael and settled in Teveria. Rav Yaakov Shimshon joined forces with Harav Avraham of Kalisk zt”l, who led the chassidic kehillah of Teveria and Tzfas, to fight poverty and to enhance the activities of the kehillah.

With time, Rav Yaakov Shimshon sent Harav Efraim Fishel of Zaslav, zt”l, to Europe to collect funds; and eventually he traveled to North Africa himself to collect the necessary funds.

Upon his return, he met Harav Nachman of Breslov, zy”a, in the port of Haifa. The two tzaddikim secluded themselves for a lengthy period of time.

Harav Bunim of Peshischa, zy”a, related that once Rav Yaakov Shimshon, zt”l, was on a ship on Rosh Hashanah, when a terrible storm erupted which threatened to sink the boat. He waited for dawn and then blew the shofar. The storm ceased and the journey resumed.

Rav Bunim remarked that all present thought that he wished to blow the shofar at dawn, so that in the zechus of that mitzvah the storm would stop. However, the truth is that Rav Yaakov Shimshon’s only intention was to be mekayem yet one more mitzvah before the ship disintegrated!

He was niftar in 5561/1801, and is buried in the beis hachaim of the talmidei Baal Shem Tov in Teveria, adjacent to the kever of Harav Nachman of Horodenka, zt”l.

A collection of his divrei Torah is printed in Kovetz Nachlas Tzvi, vol 7.

In 1948, the Soviet Union recognized the new state of Israel.

In 1954, a unanimous U.S. Supreme Court handed down its Brown v. Board of Education of Topeka decision, which held that racially segregated public schools were inherently unequal, and therefore unconstitutional.