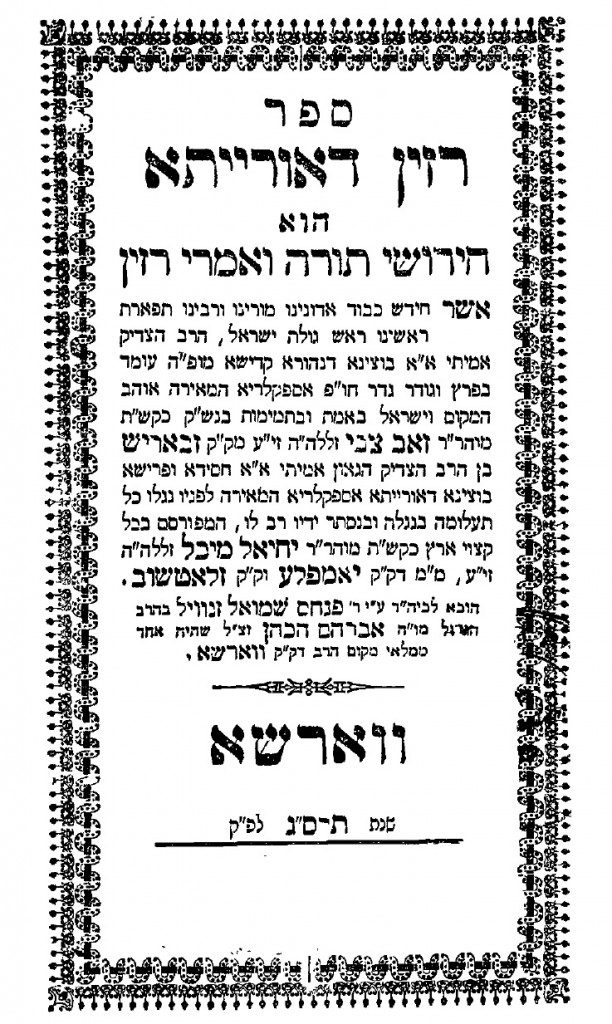 In 2449/1312 B.C.E., Moshe Rabbeinu sprinkled the freshly produced mei chattas (from the ashes of the parah adumah) on the members of Shevet Levi.

In 5704/1944, the Nazis raided the Kovno ghetto and removed all the children for execution. Hy”d.

Reb Binyamin Zev was the son of Harav Yechiel Mechel of Zlotchov, zy”a. He was the third of five brothers: Harav Yosef of Yampola, Harav Yitzchak of Radvill, Harav Binyamin Zev of Zbariz, Harav Moshe of Zhvil and Harav Mordechai of Kremenitz. The five brothers were referred to by their holy father as the five Chumashim of the Torah.

Reb Binyamin Zev, who embodied extreme humility, traveled to the Chozeh of Lublin (who was also his father’s talmid), and to Harav Menachem Mendel of Riminov.

He married the daughter of Harav Asher Tzvi Zhack, the Rav of Sharigrad. He led an eidah of Chassidim in Zbariz, and some of his talmidim later became great chassidic luminaries. Among them were Harav Tzvi Hersh of Ziditchov; Harav Dovid Shlomo Soroka, author of Arvei Nachal; and Harav Naftali of Ropshitz, who came to Zbariz with his son, Harav Eliezer. Reb Binyamin Zev also met with Harav Tzvi Elimelech of Dinov, the Bnei Yissaschar, with whom he spent many hours in discussion of Torah and Chassidus.

Many tales were told of his great ahavas Yisrael. For example, Reb Binyamin Zev would call everyone who came to him a tzaddik. Once, a rasha, a Jew who had converted to Christianity, came to him and the Rebbe called him “tzaddik”! An onlooker tried to convince the Rebbe that this particular Jew was not a tzaddik, but Reb Binyamin Zev insisted: “The passuk states: ‘V’ameich kulam tzaddikim — And your nation are all tzaddikim.’ I would rather have the person’s behavior cast in doubt than to doubt the words of the passuk!”

Reb Binyamin Zev’s Torah thoughts were published posthumously in his sefarim Tiferes Tzvi Zev, published in 5656/1896, and Razin d’Oraisa, which appeared in 5663/1903. Many of his divrei Torah are based on concepts taught by his holy father, but he also elaborates on ahavas Yisrael and middos tovos. His sefarim were recently combined into one volume and published under the name Malki Bakodesh.

In 1689, William III and Mary II were crowned as joint sovereigns of Britain.

In 1713, the Treaty of Utrecht was signed, ending the War of the Spanish Succession.

In 1865, President Abraham Lincoln spoke to a crowd outside the White House, saying, “We meet this evening, not in sorrow, but in gladness of heart.” (It was the last public address Lincoln would deliver.)