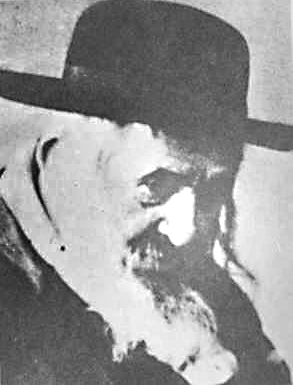 In 5316/1556, Portuguese Marranos who had reverted to Judaism were burned at the stake in Ancona, Italy, by order of the Pope. The atrocity of Ancona led the famous Dona Gracia of the House of Nasi to spearhead a boycott against the port of Ancona as a countermeasure to the Pope’s repressive policies.

Harav Yeshaya was born in 5611/1851 in Zhbarov, Hungary. His father, Harav Moshe Steiner, zt”l, was niftar when Yeshayah was 3 years old, and when he was 12 his mother, Rebbetzin Hencha Miriam, a”h, brought him to the home of Harav Tzvi Hirsh of Liska, zy”a, the Ach Pri Tevuah. Rav Tzvi Hirsh devoted time and effort to his care and greatly elevated his innate love for Torah and avodas Hashem. Rav Yeshayah served as his meshamesh, fulfilling the requirement of shimush talmidei chachamim, and became extremely close to his Rebbe. Many years later he would sign his letters, “Meshamesh bakodesh by the holy tzaddik of Liska.”

Rav Yeshayah would also travel to the Rebbe Reb Mordechai of Nadvorna, zy”a, and to the tzaddik Rav Chaim of Sanz, zy”a. Rav Chaim once honored him with zimun, a kibbud reserved only for very prominent people.

Upon the Lisker Rebbe’s petirah, Rav Mordechai of Nadvorna and the Divrei Chaim of Sanz appointed Rav Yeshayah as Rebbe. Shortly thereafter, he moved to Kerestir.

Rav Yeshayah acquired thousands of Chassidim and was renowned for his largesse in tzedakah and chessed. Harav Baruch of Gorlitz, zy”a, once said, “Rav Yeshayah’s tzedakah is accorded respect even in Heaven.” He was also known for the extraordinary mofsim he brought about for people in need of yeshuos. Rav Yeshayah’s ahavas Yisrael was also extraordinary.

Rav Yeshayah was niftar on 3 Iyar 5685/1925. He left illustrious descendants.

In 1775, Paul Revere began his famous ride from Charlestown to Lexington, Massachusetts, warning colonists that British Regular troops were approaching.

In 1942, the first World War II edition of The Stars and Stripes was published as a weekly newspaper.

In 1978, the Senate approved the Panama Canal Treaty, providing the complete turnover of control of the waterway to Panama on the last day of 1999.