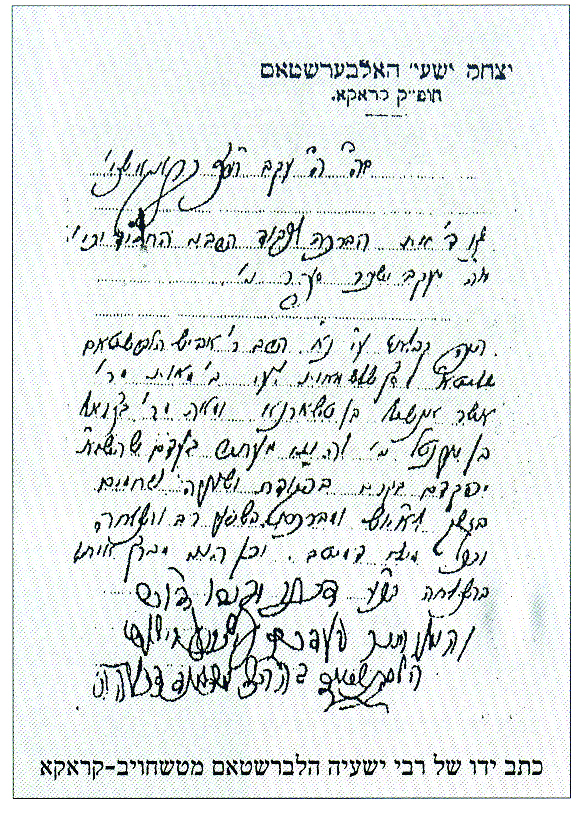 In 4949/1189, on the day King Richard was crowned king of England, Christian mobs converged on the Jews, killing many. Hy”d.

Harav Yitzchak Yeshayah Halberstam was born in 5624/1864 in Sanz, Poland. The youngest of the seven sons of Harav Chaim of Sanz, Reb Yitzchak Yeshayah was held in great esteem by the Chassidim, especially after his father said of this son, “I searched through all the heavens, and found this precious and holy neshamah.”

Orphaned at the age of 12, Reb Yitzchak Yeshayah, or, as he was fondly known, Reb Shaya’le, was brought up by his oldest brother, Harav Yechezkel Shraga of Shinev.

Reb Yitzchak Yeshayah married the daughter of Harav Yechiel Heschel of Krilowitz, son-in-law of Harav Yehoshua Rokeach of Belz, zy”a. Following his chasunah in Belz, Reb Yitzchak Yeshayah settled there, where he learned under the tutelage of his grandfather-by-marriage, Reb Yehoshua of Belz. He also became close with the Rebbe’s son and successor, Harav Yissachar Dov.

In his zivug sheini, after the early passing of his first Rebbetzin, Reb Yitzchak Yeshayah married the daughter of Harav Yaakov Tzvi Rabinowitz of Porisov, a grandson of the Yehudi Hakadosh of Peshischa and mechaber of Atarah l’Rosh Tzaddik.

At the age of 19, Reb Yitzchak Yeshayah was appointed Rav in Tchechov (Czchów), a town in Brzesko County, Poland. It is after this town that he is called Reb Shaya’le Tchechover, although he moved in Nissan 5653/1893 to Satmar, and later settled in Cracow.

Upon settling in Cracow, Reb Yitzchak Yeshayah set up his own court and became a prominent personality in the city. His court attracted thousands of Chassidim.

In 5690/1930, Reb Yitzchak Yeshayah stood at the forefront in the battle against machine matzos for Pesach, which some had tried to bring into Cracow.

When the Nazi regime took control of Cracow in September 1939, Reb Shaya’le was moved together with the local Yidden into the ghetto. Later he fled to Bochnia.

During the summer of 5703/1943, the Nazis searched for Reb Shaya’le until they found the bunker in which he was hiding. They dragged him out together with everyone else there. They murdered them all al kiddush Hashem in the city center, on 3 Elul 5703/1943. He was 79 at the time of his death. Later that night, the Chassidim gathered the remains and brought them to kever Yisrael.

All the many divrei Torah of Reb Yitzchak Yeshayah that had been written down by his Chassidim were lost during the war.

In 1939, the Union of South Africa declared war on Germany.

In 1954, groundbreaking took place for the Shippingport Atomic Power Station in western Pennsylvania.

In 1991, the Soviet Union recognized the independence of Lithuania, Latvia and Estonia. Russian lawmakers upheld a decision by residents of Leningrad to restore the city’s pre-revolutionary name, St. Petersburg.