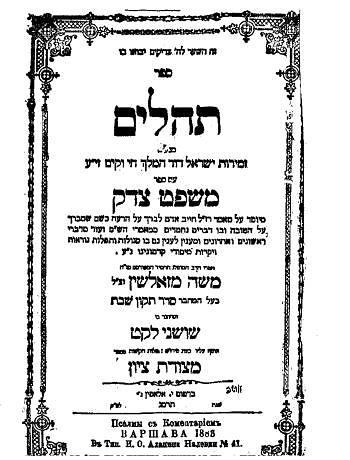 Rav Moshe was born in 5549/1789. His father was Rav Gershon. His mother, Esther, was the daughter of Rav Yechiel Michel of Zaloshin, a great talmid chacham and head of a family of distinguished descendants.

Much about Rav Moshe’s life is clouded in obscurity; there are significant gaps in our knowledge of his family background and his early years.

From a young age, Reb Moshe’s fierce love for Hashem and for his fellow Jews was apparent. Harav Ephraim Zalman Margulies, zt”l, wrote in his haskamah to Reb Moshe’s Tikkun Shabbos, “I have heard that he has an outstanding reputation — his name and community are known all over — that from his childhood he was dedicated to wholehearted service of Hashem and since his youth he has applied himself to Torah and avodah …”

Rav Moshe’s tefillos were emotional outpourings, uttered slowly and with care as he pronounced each word. He often led the tefillah on Shabbos and Yom Tov, in particular on the Yamim Nora’im.

Reb Moshe was an ardent advocate of immersing in the mikveh, fervently extolling the practice in his Mishpat Tzedek.

He was extremely sensitive to others’ suffering. On seeing a fellow Jew weighed down by troubles, he directed his energies to providing relief, whether monetary, physical or emotional support. When this did not suffice, he would speak to the sufferer at length, using his special gifts of expression to ease the pain, extend comfort and encourage hope for a yeshuah from Hashem.

Another mitzvah close to his heart was enabling poor brides to marry. On one occasion he set out on foot for Warsaw to raise funds for a bride whose father was unable to provide her with a dowry. He made a point of serving as mohel in Zaloshin and the surrounding villages. He would walk long distances in order to perform this mitzvah.

Rav Moshe’s originality was also apparent in the sefarim he wrote. In the introduction to Mishpat Tzedek, he explained that he was led to write the sefer upon seeing how many of his fellow Jews were unable to come to terms with the various kinds of suffering that they experienced. They were unaware of the positive aspects of suffering and that it is for the sufferer’s ultimate benefit. The sefer is full of ideas and teachings on accepting suffering lovingly, with many related pieces on Torah, tefillah and avodas Hashem in general, and special customs and tefillos for times of distress.

Rav Moshe did not live to see his sefer completed. He was niftar on Erev Rosh Chodesh Av 5591/1831, at age 42. The sefer was edited by his close disciple, Harav Yisroel Ze’ev of Zaloshin, who published it after his Rebbe’s petirah.

His other sefarim are Tikkun Shabbos and Geulas Yisrael.

In 1790, the U.S. Coast Guard had its beginnings as President George Washington signed a measure authorizing a group of revenue cutters to enforce tariff and trade laws and prevent smuggling.

In 1944, 15-year-old diarist Anne Frank was arrested with her sister, parents and four others by the Gestapo after hiding for two years inside a building in Amsterdam. (Anne and her sister, Margot, died at the Bergen-Belsen concentration camp.)

In 1977, President Jimmy Carter signed a measure establishing the Department of Energy.