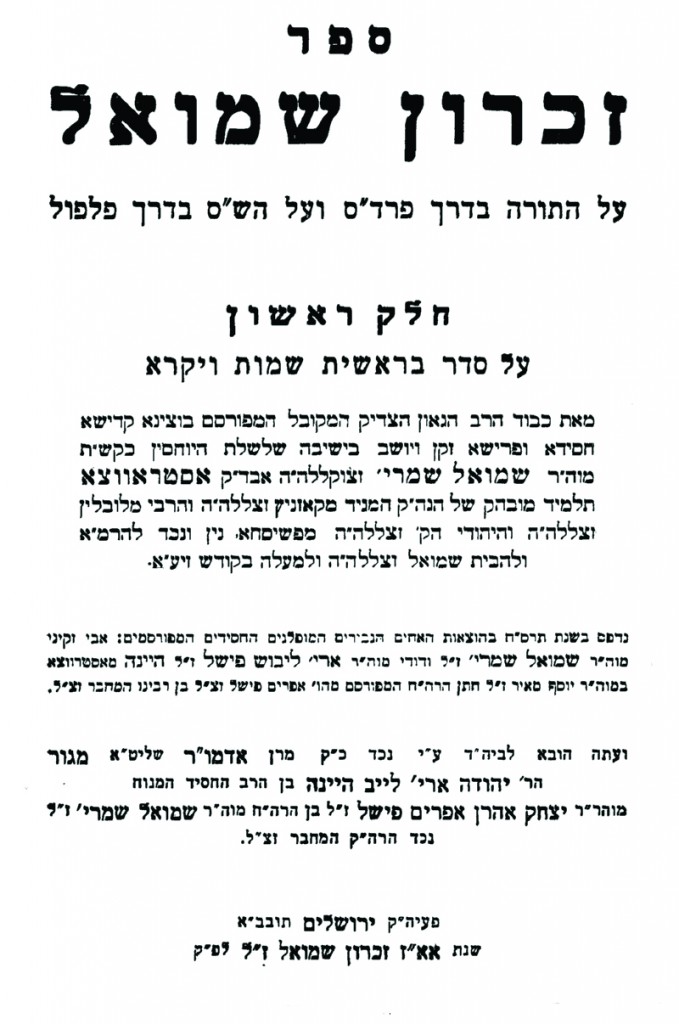 In 5701/1941, within a few days of theireffort to invade Russian-occupied territory, the Nazis overran Vilna, Kovno, Bialystok and Riga, thereby closing the famed Slabodka and Telshe yeshivos, among others. The invasion brought about massive pogroms by the local populations in which thousands were killed.

Harav Shmuel Shmaryahu Heine was born in 5518/1758. He was the son of Harav Yaakov of Zhvalin, a grandson of Harav Shmuel of Fiorda (mechaber of Beis Shmuel on Even HaEzer). He was also a descendant of the Rema.

Reb Shmuel was a talmid of the Kozhnitzer Maggid, the Chozeh of Lublin and the Yehudi Hakadosh of Peshischa.

After their petirah, he traveled to Harav Yerachmiel of Peshischa and Harav Moshe Elyakim Biyeh of Kozhnitz.

Reb Shmuel served as Rav in Ostrovtza for close to 50 years. He was also Rosh Yeshivah in the city, teaching multitudes of bachurim. Among the more famous: Harav Shimshon, Rav of Kintzk; Harav Dov Berish, Rav of Zelichov; and Harav Moshe Yehudah, Rav of Konstantin.

He wrote many chiddushim on the Torah and in drush, including divrei Torah from his Rebbes that were unknown — he serves as the only source for these divrei Torah. They were published some 80 years after his petirah by his grandsons as Zichron Shmuel.

The sefer carries the haskamos of many of the generation’s foremost Gedolim, zt”l: Harav Meir Yechiel of Ostrovtza, the Knesses Yechezkel of Radomsk, Harav Shalom Mordechai of Brezhan, and others.

In 1864, Confederate forces repelled a frontal assault by Union troops in the Civil War Battle of Kennesaw Mountain in Georgia.

In 1950, the U.N. Security Council passed a resolution calling on member nations to help South Korea repel an invasion from the North.

In 1963, President John F. Kennedy spent the first full day of a visit to Ireland, the land of his ancestors, stopping by the County Wexford home of his great-grandfather, Patrick Kennedy, who’d emigrated to America in 1848.

In 1991, Supreme Court Justice Thurgood Marshall, the first black jurist to sit on
the nation’s highest court, announced his retirement.