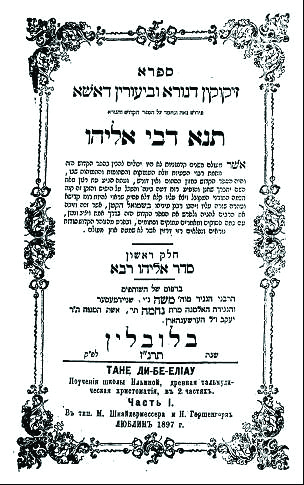 In 3830, the Romans completed the construction of banks around Yerushalayim in preparation for the final assault on the third wall surrounding the city.

In 5575/1815, Napoleon Bonaparte was defeated in battle at Waterloo.

Harav Shmuel Heide was the son of Harav Moshe, zt”l, darshan and maggid in Prague.

Rav Shmuel’s hasmadah and dedication to learning helped him grow great in Torah and yiras Shamayim.

For most of his life, he served as Dayan in Morawitz (near Prague).

He is best known for his Zikukin D’nura U’biurin Desha, his lengthy commentary on Tanna D’vei Eliyahu. Since the old print of Tanna D’vei Eliyahu is hard to decipher, Rav Shmuel edited the work and made corrections, but he warns in his hakdamah that one should not learn from his edition until first checking the original text.

Initially, Rav Shmuel was hesitant to undertake this project, but after he davened many tefillos and observed many fasts, Hashem allowed Eliyahu Hanavi and his talmid Rav Anan to reveal themselves to Rav Shmuel and let him know the correct explanations and the accurate wording of the sefer.

Rav Shmuel divided his commentary into three parts: on Eliyahu Rabba, on Eliyahu Zuta and on the 20th perek of Eliyahu Zuta. This third section was never printed.

When the sefer was published, the Gedolei Hador heaped praise on the mechaber, stating that he had restored the correct text of the Tanna D’vei Eliyahu.

In 1973, the United States launched Skylab 1, its first manned space station. (Skylab 1 remained in orbit for six years before burning up during re-entry in 1979.)