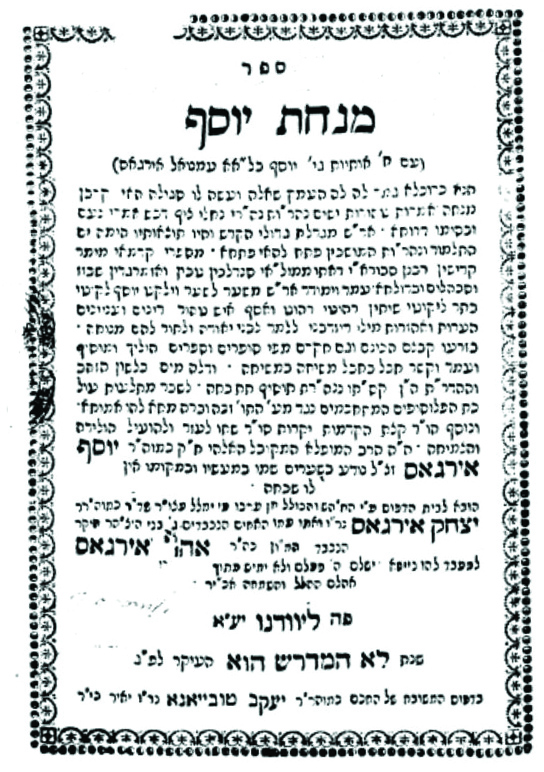 In 2449/1312 B.C.E., Moshe Rabbeinu conveyed Bnei Yisrael’s affirmative reply to Hashem, as they prepared themselves for Mattan Torah.

In 3828/68 C.E., Vespasian Caesar, father of Titus, captured Yericho and killed its inhabitants.

In 4925/1165, the Rambam reached Eretz Yisrael safely after a turbulent journey. He designated this day as a personal Yom Tov.

He learned in the yeshivah of Harav Shmuel de Pas in Livorno, excelling in Torah.

At the age of 18 he married his cousin (his mother’s niece).

At that time, Harav Binyanim Hakohen, a famous mekubal from Reggio, began expounding Kabbalah. Rav Yosef had a strong wish to learn Kabbalah, so he went to Reggio.

After learning Kabbalah for several years, he traveled from city to city, encouraging others to learn it as well. For a while he lived in Pisa, where he founded and headed Yeshivas Neveh Shalom.

Later he returned to his home town of Livorno, where he was appointed Rav.

While serving as Rav, Rav Yosef still found time to teach talmidim, and was also in contact with many other Rabbanim concerning halachic she’eilos.

In 1954, during the Senate-Army Hearings, Army special counsel Joseph N. Welch famously berated Sen. Joseph R. McCarthy (R-Wis.), asking McCarthy: “Have you no sense of decency, sir? At long last, have you left no sense of decency?”

In 1969, the Senate confirmed Warren Burger to be the new chief justice of the United States, succeeding Earl Warren.

In 1986, the Rogers Commission released its report on the Challenger disaster, criticizing NASA and rocket-builder Morton Thiokol for management problems leading to the explosion that claimed the lives of seven astronauts.