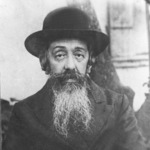 In Elul 5626/1866, he married the daughter of Harav Avraham Yaakov, Rebbe of Sadigura, his great-uncle.

After the petirah of his first wife on 25 Sivan 5647/1887, Reb Yisrael Shalom married the daughter of Harav Yaakov Shimshon Chodorov of Bahapli. They had four sons and five daughters.

Reb Yisrael Shalom was niftar on 29 Av, Erev Rosh Chodesh Elul, 5671/1911, in Dvenzhkeh near Vizhnitz. He was fifty-eight. He was buried in the Ohel in Vizhnitz near the Tzemach Tzaddik.

In 1680, the Pueblo Indians drove the Spanish out and took possession of Santa Fe, N.M.

In 1841, a patent for venetian blinds was issued to John Hampton.

In 1888, the adding machine was patented by William Burroughs.

In 1991, the hard-line coup against Soviet President Mikhail S. Gorbachev collapsed in the face of a popular uprising led by Russian Federation President Boris N. Yeltsin.