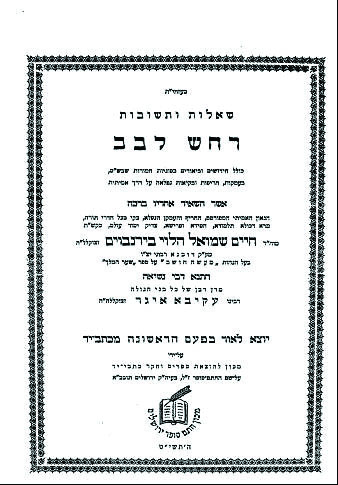 In 4956/1196, Rabbeinu Yitzchak ben Rabbeinu Asher, a grandson of the Riva, was killed along with numerous other Jews because of a blood libel. Hy”d.

In 5650/1890, Jews of Austria were required by law to belong to the government-established religious community in their town.

While still a child, Reb Chaim Shmuel knew the words of the Sma and the Shach on Choshen Mishpat by heart, as he writes in his Rachash Levav.

When the shidduch was made between Reb Chaim Shmuel and the daughter of Harav Akiva Eiger, because of the distance involved Rav Akiva could not attend the tena’im; the traveling time would have caused immense bittul Torah for his talmidim. He therefore asked Harav Efraim Zalman Margulies, Rav of Brod, to attend in his place. Rav Efraim Zalman stayed on at the simchah until after midnight. When asked why he stayed that late, he answered with a smile, “For all the time that I was there I was in place of Rav Akiva Eiger. What does it bother you if I will ‘be Rav Akiva Eiger’ for a few more hours?”

Reb Chaim Shmuel lived in Dubna. Aside from his greatness in Torah, he was also renowned for his tzidkus and for his ascetic practices.

He would not even drink water until first finishing a masechta, which could take him all day. He would sit wrapped in his tallis and tefillin until night. On Shabbos and Yom Tov he refrained from all mundane talk.

Many wondered how he could manage to learn Torah in such depth, and to debate at such length, while his body was so weak.

In 1864, the United States Senate passed, 38–6, the 13th Amendment to the U.S. Constitution, abolishing slavery. The House of Representatives passed it in Jan. 1865; the amendment was ratified and adopted in Dec. 1865.

In 1904, Longacre Square in Manhattan was renamed Times Square after The New York Times.

In 1913, the 17th Amendment to the Constitution, providing for popular election of United States senators (as opposed to appointment by state legislatures), was ratified. President Woodrow Wilson became the first chief executive since John Adams to address Congress in person as he asked lawmakers to enact tariff reform.