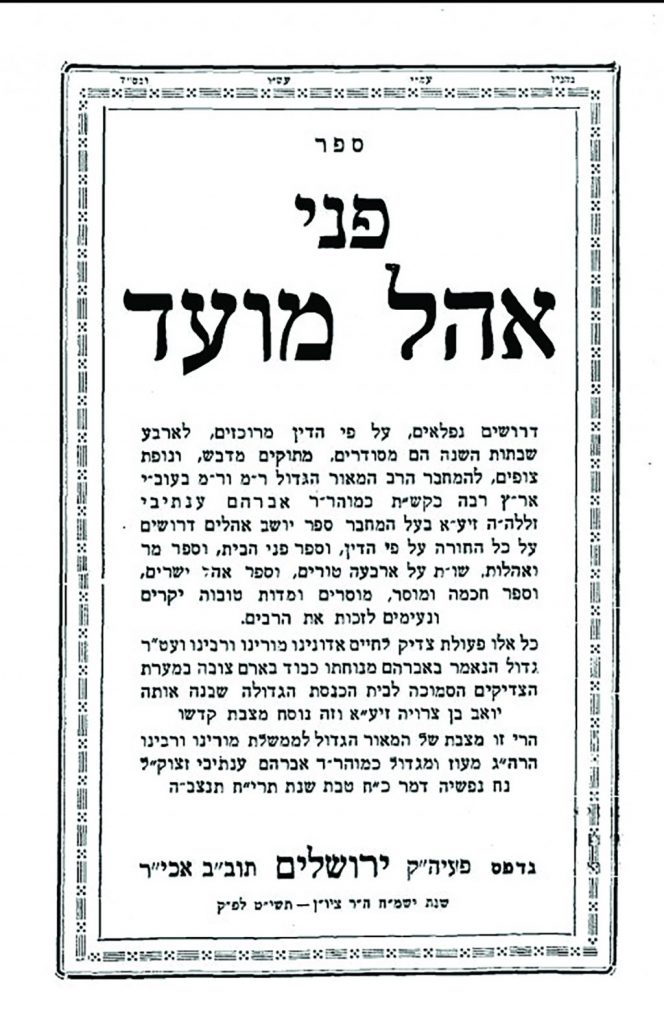 Harav Avraham Entebi was born in 5525/1765. His father, Rav Yitzchak, one of the Gedolim of the generation, was a member of the elite group of Rabbanim in Aram Tzova, which included Harav Tzadkah Chutzin, Harav Yehudah Yom Tov Katzin and Harav Yitzchak Brachah, among others.

Rav Avraham was a student of his father.

Rav Avraham stood out among the many Torah leaders in his generation for the sharpness and clarity of his learning and his psak. Halachic she’eilos were addressed to him from across the Torah world.

Rav Avraham was the Rosh Yeshivah and Rav in Aram Tzova for over 40 years. As Rav, he never feared ruling in favor of the underdog, even against affluent members of the kehillah.

Rav Avraham wrote many sefarim, a number of which were published. These include Yoshev Ohalim on the Torah; Pnei Habayis on the Toras Habayis of the Rashba; Pnei Habayis on the Beis Yosef’s commentary on Choshen Mishpat; She’eilos U’teshuvos Mor v’Ohalos, on the four sections of Shulchan Aruch; Ohel Yesharim; Chochmah U’mussar, his mussar work; and Pnei Ohel Moed on Even Ha’ezer. Many of his other sefarim were never published.

In 1784, in a letter to his daughter Sarah, Benjamin Franklin expressed unhappiness over the choice of the bald eagle as the symbol of America, and stated his own preference: the turkey.

In 1870, Virginia rejoined the Union.