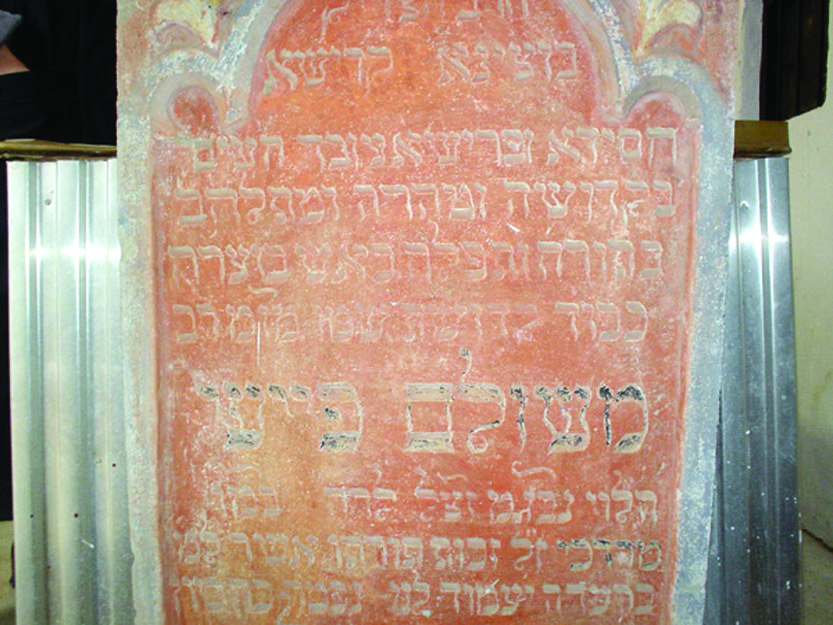 In 3448/313 B.C.E., after the victory of Geviha ben Pesisa three days earlier, Ishmaelites, Egyptians and Canaanites retreated and left their fields and properties to the Jews.

Harav Meshulem Feish, the son of Harav Mordechai, was born in 5581/1821 in Joseph’s Dorf, a town near Karlsbad (Karlovy Vary, Czech Republic). As a child he studied in a modern school; but eventually, under the influence of his pious mother, he traveled to Hungary to learn in a yeshivah. There he excelled as a talmid of Harav Avraham Yitzchak Weinberger, later Rav of Kleinvardein.

Later he moved to the town of Gebe, in order to totally immerse himself in Torah and Chassidus.

He married the daughter of Harav Yeshayah Dovid of Chasar, a town of chassidim and anshei maaseh. After his wedding he stayed on in Chasar, where he continued his avodas hakodesh while living in poverty. Eventually he accepted a post as melamed in the town of Teglash.

From Teglash he was invited to become Rav in Tosh, where he eventually began leading a flock of chassidim.

Reb Meshulam Feish traveled to the courts of Harav Yitzchak Eizik, the Heichal Habrachah of Komarno; Harav Tzvi Hirsch of Liska, the Ach Pri Tevuah; Harav Chaim of Sanz, Harav Yitzchak Eizik of Ziditchov; and Harav Yehudah Tzvi of Rozla.
But his primary Rebbe was Harav Dovid of Dinov, the Tzemach Dovid, who ordained him as a Rebbe. Even after he had many chassidim of his own, he traveled to Reb Dovid of Dinov at least once a year.

As Rebbe, Reb Meshulam Feish was renowned for his fiery avodah, especially during davening. He was also known for his mofsim, and he accomplished many yeshuos for his chassidim.

Chassidim would say that as the Rebbe danced at his Friday night tisch, he would bring down yeshuos and refuos from Shamayim for all who needed them.

For him, Shabbos began early Friday morning when he started preparing for it, and his unique and uplifting kedushas Shabbos would continue until after Havdalah.

Reb Meshulam Feish fought the Reform movement in Hungary, participating in the special congress in 5629/1869 in which the communities were divided.

In 5633/1873, an epidemic broke out in Hungary and many Jews died, including two of Reb Meshulam Feish’s sons. The chassidim later said that Reb Meshulam Feish took upon himself to pass away from this world as a korban tzibbur — and with his petirah, the plague stopped.

He was succeeded by his son Harav Elimelech, who was born in his later years. (His other son, Harav Mordechai, refused to become Rebbe.)

The Tosher dynasty continues to thrive under the current Tosher Rebbe, shlita, whose center is Kiryas Tosh, a small town outside of Montreal where the Rebbe resides.

In 1483, Richard III began his reign as King of England. (He was crowned the following month at Westminster Abbey.)

In 1870, the first section of Atlantic City, New Jersey’s Boardwalk, was opened to the public.

In 1936, President Franklin D. Roosevelt was nominated for a second term of office by delegates to the Democratic National Convention in Philadelphia.

In 1944, the Republican National Convention opened in Chicago with a keynote speech by California Governor Earl Warren.

In 1950, President Harry S. Truman authorized the Air Force and Navy to enter the Korean War.

In 1974, the supermarket price scanner made its debut in Troy, Ohio, as a 10-pack of Wrigley’s Juicy Fruit chewing gum costing 67 cents and bearing a Uniform Product Code (UPC) was scanned by Marsh Supermarket cashier Sharon Buchanan for customer Clyde Dawson. (The barcoded package of gum, never chewed, is on display at the Smithsonian Institution’s National Museum of American History in Washington, D.C.)

In 1989, the Supreme Court ruled the death penalty may be imposed for murderers who committed their crimes as young as age 16, as well as for killers who have mental retardation.