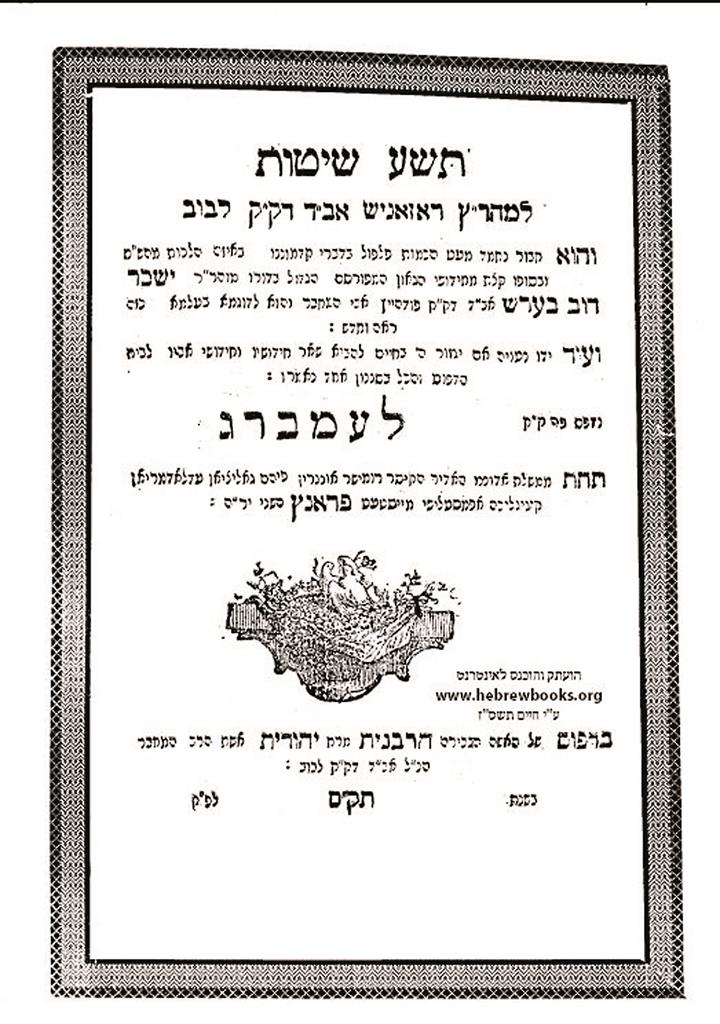 1657/2105 B.C.E., the 40 days and nights of rainfall that covered the face of the earth with water during the Mabul ended on this date (according to Rabi Eliezer).

Reb Tzvi Hirsh served as Rav of Bolchov and later of Zholkov.

With the petirah of Harav Mordechai Zev Orenstein, Rav of Lvov, Reb Tzvi Hirsh was appointed to succeed him. He did not take a salary, since his Rebbetzin supported them by managing a printing press.

Reb Tzvi Hirsh led the city with a firm hand. He taught many talmidim in his yeshivah. His home was an open house, both for talmidei chachamim and for Yidden looking for a place to eat or sleep.

In 5560/1800, Reb Tzvi Hirsh published Tesha Shittos on many sugyos in Shas. In this sefer his powerful pilpul was on display. At the end of the sefer Reb Tzvi Hirsh included a kuntres of his father’s chiddushim under the name Chezkas De’Avhasa.

Many of the mechabrim of sefarim at the time sought the haskamah of Reb Tzvi Hirsh.

In 1777, Gen. George Washington led his army of about 11,000 men to Valley Forge, Pennsylvania, to camp for the winter.

In 1907, 239 workers died in a coal mine explosion in Jacobs Creek, Pennsylvania.

In 1950, Gen. Dwight D. Eisenhower was named commander of the military forces of the North Atlantic Treaty Organization.

In 1972, Apollo 17 splashed down in the Pacific, winding up the Apollo program of manned lunar landings.

In 1974, Nelson A. Rockefeller was sworn in as the 41st vice president of the United States in the U.S. Senate chamber by Chief Justice Warren Burger with President Gerald R. Ford looking on.

In 1984, Britain and China signed an accord returning Hong Kong to Chinese sovereignty on July 1, 1997.

In 1986, Lawrence E. Walsh was appointed independent counsel to investigate the Iran-Contra affair.

In 1998, President Bill Clinton was impeached by the Republican-controlled House for perjury and obstruction of justice. (He was subsequently acquitted by the Senate.)